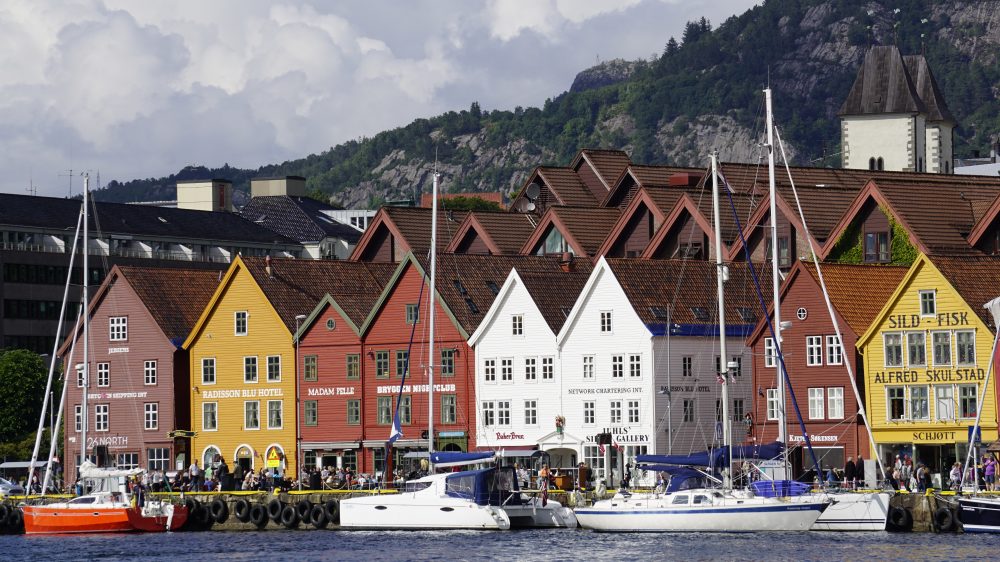 “Oh man, here we go again”, I thought as the rain poured mercilessly down into the city. We had just arrived after a 5-hour bus ride from Stavanger – which also happens to be the stopping off point for the worst travel experience of my life, my horrid hike up to Pulpit Rock. The hike during which I was rained upon for 6 hours non-stop, climbing slippery rocks and feet plunging into mini rivers in 10°C weather, shivering, cold and wet. Nasty stuff.

And then we were in Bergen – a city that is notorious for being one of the rainiest places in Norway. In fact, the city seems to proudly celebrate the fact that it rains, on average, for 266 days of the year; our hotel, Zander K, was littered with literature about the rain, and even played it up in their restaurant’s menu.

So, when we left the bus station in search of our hotel, and once again, braved the rain, yes, I wasn’t quite the happy little ducky. Will it stay like this for the next 3 days I wondered?

Well, the weather gods must have taken pity on me after that gnarly Pulpit Rock experience, because, miracle of miracles – the weather cleared (and stayed clear for my entire time in Bergen) as soon as we had checked in to the hotel!

And when the skies in Bergen are blue, oh boy are they blue! Many an evening was spent just hanging around the harbour, the hub-bub of Bergen life, and tucking into sweet shrimp and super-sized crab claws.

In fact, at the end of my 3-week adventure in Norway, I would definitely rank Bergen as one of my top highlights.

Here are 7 Reasons to visit Bergen: 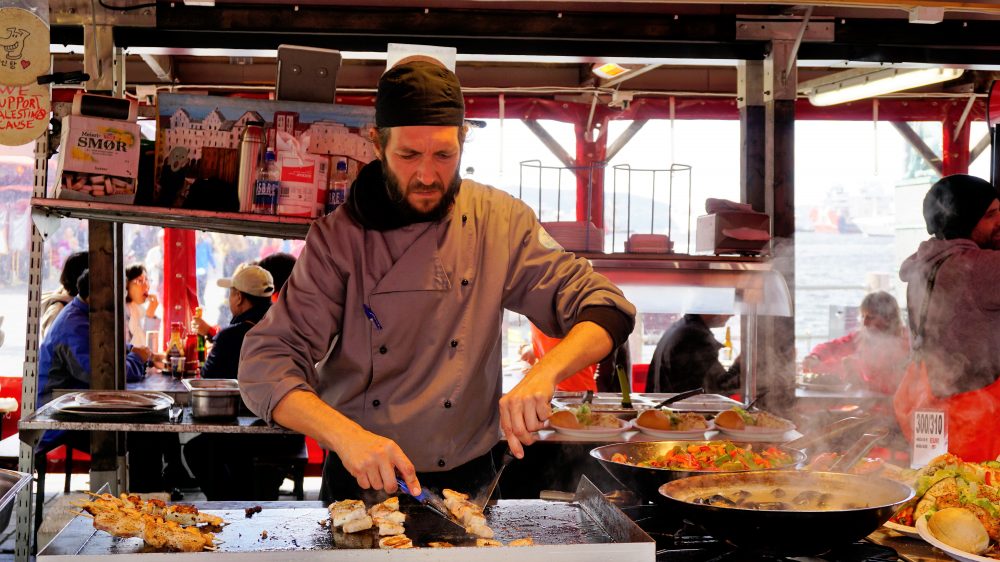 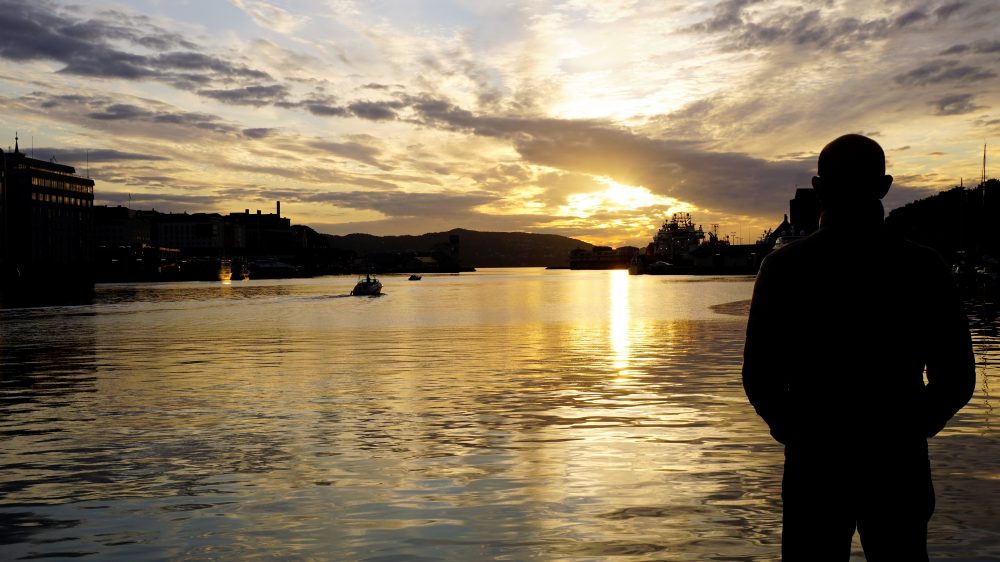 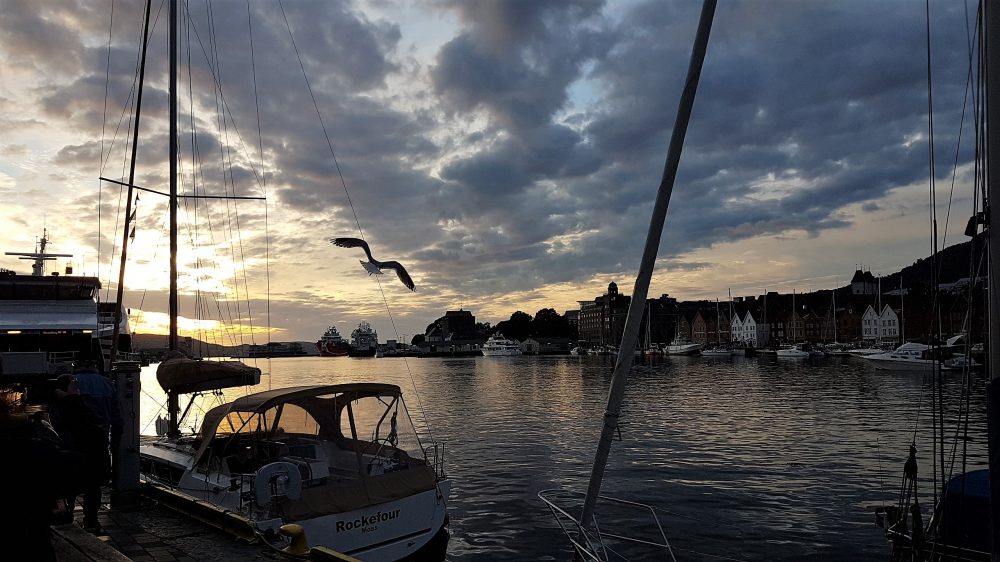 We ate many a lunch and dinner at the bustling Fisketorget Fish market. There’s salmon sashimi so fresh, it just melts in your mouth; it can almost give fatty tuna a swim for its money.

And the lobsters, crab claws, king crab legs, prawns, mussels, fresh fish of all kinds – what a feast!

It’s fun to watch the seagulls compete for your scraps, after you’ve feasted. And the harbour where the fish market is located boasts classic views across to Bryggen and upwards to the 7 hills of the city too.

As we were there during summer, we waited and waited for the sun to set but it never did (well, we gave up eventually because we had to sleep, right?). I can safely say that watching the ferries and boats zip in and out of the harbour never quite gets old.

One of the most popular tourist activities is also one of Bergen’s most fun. Take the Floibanen funiculur to Mt Floyen, 320m above sea level. I did it immediately upon arriving, not only because the skies were blue then, but it’s also a great way to get a panoramic view of the city below.

If you can, try to get a seat right in front, so that as you’re pulled backwards, the city unfolds beneath you like a tapestry unrolling.

Once up, and after the requisite photo-takings, we walked to the Skomakerdiket lake – it’s a short walk and the resident ducks are happy to pose for photos with you.

You can take a 45-minute walk back down to the city, or take the funicular back down instead.

Even though I had taken the funicular up to Mt Floyen, I still wanted to take the cable car up to Mt Ulriken but I never made it as we only saw clouds clinging to the top, every day of our time in Bergen.

Mt Ulriken, at 643m, is the highest of the Bergen’s 7 hills. There’s a restaurant Sky:skaperen so if you do make it there, time it for around lunch or dinner, especially when it’s a clear night and you can see the city lights below. 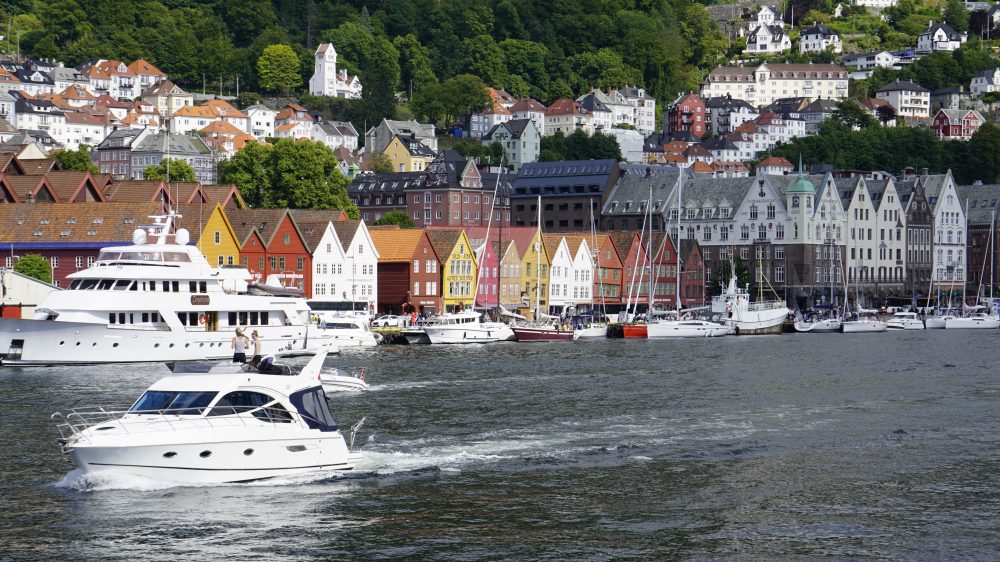 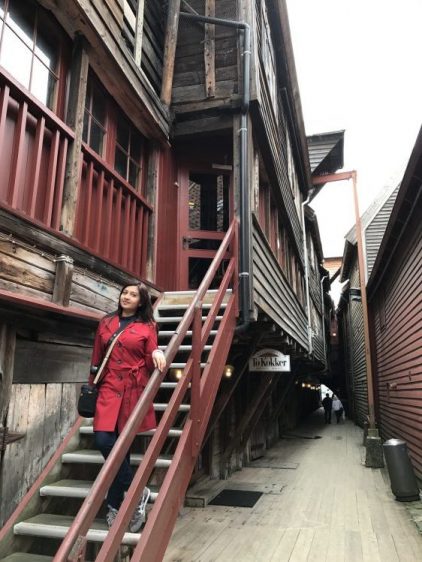 Google Bergen and the 1st image you’re likely to see is the multi-hued timber buildings of Bryggen packed tightly beneath the hills of Bergen.

Bryggen used to be the hot seat of trading action during the Hanseatic league days (more on the league below) and is a UNESCO-protected World Heritage site.

As you walk through narrow corridors, notice how the rickety and narrow staircases lead up to sparse rooms where the smell of dried cod fish (the principal product traded during those times) still clings to the air.

Bryggen now boasts shops of a different kind – featuring artisanal products like silver, wool and art. In fact, this is where we bought our only souvenir of Norway (asides from a packet of brown cheese of course).

There are several museums to hideout in during a rainy day, including Bergen’s premier art museum – KODE. And Norway’s most famous composer, Edvard Greig’s Swiss-style villa is now a museum, located in the leafy grounds of Troldhaugen. If you’re into classical music, you’d probably enjoy visiting the little hut where he spent many nights composing in peace.

Seeing as how historically important the Hanseatic League and Bryggen was to Bergen, I chose to visit the Bryggen museum, Hanseatic Museum and the Schotstuene Assembly Rooms.

From 1350-1750, enterprising German merchants used Bergen as a hub for stockfish trading and pretty much ran the town. The Hanseatic museum is a recreation of the merchants’ living quarters and we learnt about the exclusive all-male society with its uber hierarchy. Stories were shared about young men who endured olden time “hazing” and who slept in bunks that could only be opened from the outside. Imagine wanting to go to the toilet in the middle of the night!

Tip: Get a joint ticket to the Bryggen + Hanseatic + Schotstuene – and time your visit for the guided tour. We booked a day in advance for the tour and it definitely enriched our visit to the 3 museums. One of the most popular fjords to visit while at Bergen is Hardangerfjord – also known as the Queen of Fjords thanks to it being the widest fjord in Norway.

But seeing as how we had already visited Geirangerfjord (this S-shaped fjord is often referred to as Norway’s most beautiful fjord) and had Naeroyfjord (Norway’s narrowest fjord) coming up, we figured it was one fjord too many.

We came to that conclusion thanks to an extremely helpful and passionate lady at the fjord tours office. That is where we had a mini-geography lesson on fjords and we learned about Rosendal – a charming hamlet located towards the beginning of the Hardangerfjord.

The ferry ride to Rosendal leads you past coastal villages and takes about 2 hours one way.

Start off at the visitor centre to get a feel of what you can do within the timing that you have. We could have done a short hike up to get a bird’s eye view of the hamlet and the fjord but we spent too much time at the Barony Rosendal and couldn’t in the end.

The Barony Rosendal is Norway’s only baronial mansion from 1665 – you can take a tour of the “world’s smallest castle” or just spend time smelling the roses in the lovingly maintained rose gardens. I loved surreptitiously plucking lavender from the herb garden, bruising them between my fingers and releasing the soothing scent – mental note, Provence next year!

After a delicious lunch at the flower-filled café next to the castle, a short walk from the castle led us to a beautiful waterfall, the name of which I am not sure of because it wasn’t specifically marked on a map or anything, but that is the beauty of having your own time in Norway – you never know what surprise you will stumble upon! Bergen has its fair share of fine restaurants, not counting the amazing fresh seafood by the harbor.

This is also where I learnt why there were so many Thai restaurants in Norway. Where I also was offered a chance to stay in Norway, while my Norwegian waiter moved to Singapore because “it’s always hot”. Yes dear, it is always hot in Singapore, which explains my Scandic obsession to cool down!

Aside from the aforementioned Fishmarket area, below are three of the best restaurants in Bergen to check out:

Lysverket – located at Kode 4, they dub themselves “neo-fjordic” using the best of the produce from the fjords. Ultra-hip, this is also a great place for just drinks.

Pingvinen – locals’ favourite, you’ll find traditional favourites like whale, reindeer, lamb and salmon, prepared the way granny used to. This place is great to stay on for late-night drinks with the locals.

These are my main highlights of Bergen. What are yours? Do share in the comments below!