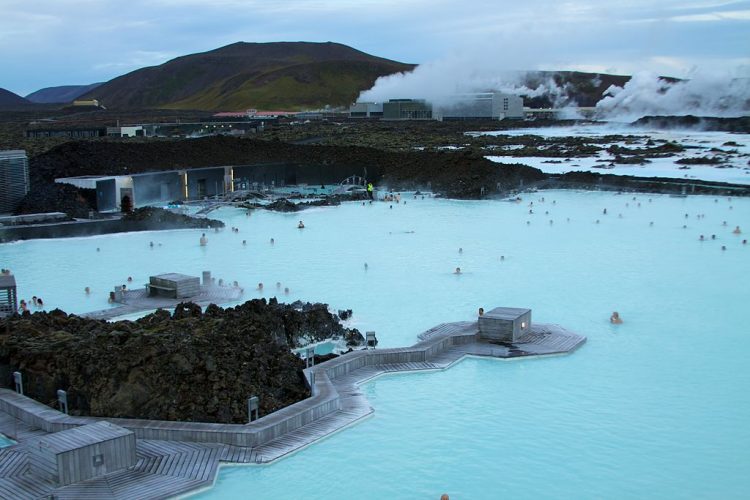 Last year, we celebrated our 10th year of being together, in Iceland and it really was a magical trip!

From volcanoes that throw surprise parties now and then, complete with fireworks and ashy plumes to gigantic glaciers grinding downhill, threatening to melt and make one large swimming pool out of Iceland, to geysers that shower you with boiling hot drops of sub-terranean water to gushing waterfalls that hide pots of gold at the end of double rainbows, this Island sneaks in surprise twists and turns every which way you go.

Here’s how to fall in love in (or is that, with?) Iceland:

Pretend that you’re one of the locals:

Stay at Castle House Luxury Apartments in Reykjavik. Well, Reykjavik is so compact that wherever you stay would be great. But I loved our walk home every night to what felt like our very own apartment. And waking up every morning to the cute little duckies swimming in the peaceful Lake Tjornin right outside our home. Try to learn a little about Iceland’s history so you can be more convincing as a local:

Visit the National Museum, and my favourite, the Reykjavik 871 +/-2 The Settlement Exhibition.

The National Museum takes you across the settlement ages to modern times where you can discover all sorts of facts from the DNA of Icelanders to realizing that Bjork must have been really young when she had her 1st album out in the 1970s!

As for The Settlement Exhibition – it is a museum designed around a Viking longhouse and dives into the settlement era of Iceland. Across the museum is a live excavation site where archeologists are still uncovering Viking artifacts. Visit any of these restaurants and try whale and puffin meat while you’re at it.

Matur Og Drykkur – saw Ainsley on telly eating fermented shark and promptly spitting it out. That said, you don’t have to try the shark, instead experience true Icelandic cuisine, just the way the Viking forefathers did.

Sushi Samba – Japanese food in Iceland? Hell, yeah. It’s all the rage and why not? Considering that fishing is a key contributor to the economy, you can expect really fresh, delicious sushi here.

Saegreifinn – this seaside shack is famed for its lobster soup and variety of amazing, fresh fish waiting to be barbequed.

Kol – one of the hottest joints in Reykjavik, this restaurant serves up sexy cocktails and gorgeous food. Try the lamb!

My favourite? Fiskmarkadurinn. I’d recommend this for an anniversary dinner and splurge on the Tasting Menu which will leave you oh-so-satiated, guaranteed! And that complimentary glass of champagne to celebrate our anniversary just sealed the deal. Make friends with a local, and set off on a road trip to the South of Iceland:

Ok, to be honest, we hired a local guide to drive us as it was winter and being typical city folk, we were not too comfortable driving the treacherous terrain of the South.

That’s just being a tad dramatic, but having a born and bred Icelandic, passionate person as your guide means free history lessons! And all the spots the tourist guide books won’t tell you about.

Steal a kiss at the waterfalls of Iceland:

The waterfalls of Iceland are legendary, even rock band Live used them for their Heaven music video.

From the most popular Gullfoss where you’re likely to see a double rainbow to the voluminous, classically shaped Skogafoss to the “black falls” of Svartifoss, there will be many chances to snog your loved one amidst all that gushing water. Get wet in the wettest part of Iceland:

Aha, got you there! Vik, the southernmost tip of Iceland, and also home to the spectacular black sand beach, Reynisfjara, which features hexagon-shaped basalt columns that look like a church’s organ and that we were told, was the inspiration for the design of Reykjavik’s iconic Hallgrimskirka church. Fire up your love with the impending threat of a volcanic eruption:

Pay homage to the infamous Eyjafjallajokull, aka E16, for the countless journalists who couldn’t pronounce the name whilst reporting on the massive eruption in 2010. The same eruption that caused a shut down of air traffic in Northern and Western Europe for 6 days, thanks to the stubborn ashy plume that clung to the skies.

There’s also the evil twin sister volcanoes, Katla and Hekla who are, naturally, plotting a date for fireworks.

Take a love boat cruise in an iceberg lagoon and share a block of 1000-year-old ice at Jokulsarlon:

Often seen in official shots of Iceland, Jokulsarlon lagoon has gigantic 1000-year-old icebergs breaking off glaciers and crashing into the lagoon. Take the amphibious boat ride and admire the stunning Tiffany-blue marbling of the icebergs and lucky you if you catch a sunrise or sunset while you’re at it. Video of the icebergs from Jokulsarlon slowly drifting to the Atlantic Ocean on the opposite side, where the gorgeous black sand beach below is.

Go skinny dipping at the beach: Just kidding. Those icebergs of Jokulsarlon float towards the Atlantic Ocean and what lies opposite is a stunning black sand beach, littered with glistening ice “rocks”. I mean, talk about a different kind of beach vacay!

Consider adopting a pet to complete your family:

Those Icelandic horses sure are friendly! They are a sturdy bunch who love nothing more than an exhilarating “tolt” across mountains and a cuddle. Get your fix at Hotel Eldhestar, a romantic horse ranch hotel on beautiful grounds and hope that the Aurora Borealis cooperates for the night, because there is nothing like the wilderness, away from the hustle and bustle of the city in which to view the lights! Of course, I cannot go without mentioning the Golden Circle or the Blue Lagoon, so do check out my posts on those too!

So, do you think Iceland would be a great place for an anniversary celebration? 🙂

Set off from Reykjavik. First stop – Seljalandfoss waterfall. Get ready to be splashed as you climb up to get a view from behind the waterfall.

Drive to Iceland’s southernmost town, Vik. Walk along the black sand beach of Reynisfjara and admire the hexagon-shaped basalt columns as the raging waves of the Atlantic Ocean crash behind you. Marvel at the spooky-like lava columns known as Reynisdrangur that rise up from the ocean, but keep your distance. We were told tourists had died going into the powerful Atlantic Ocean.

Have lunch at the small restaurant at the beach – simple fare like lamb soup and bread. Nothing to rave about but according to our very experienced local guide, a better option than eating at Vik itself.

Drive on to Dyrholaey – a promontory which features views of the Myrdalsjokull ice cap to the north and a huge lava sea arch. Sneak a peek into the lighthouse and fantasize about a night’s stay there.

By now, you would have driven past the infamous Eyjafjallajokull and another volcano due for eruption – Hekla. Affectionately referred to during the Middle Ages as the “gateway to hell”, Hekla is known as much for its devastating eruptions as for its extreme punctuality – it’s said to erupt every 10 years or so. The last eruption was in 2000 though, and with reports around on the fact that she is due for a biggie, it looks like the teasing game continues for Ms Hekla!

Continue eastwards, traveling across the 70km desolate stretch of Myrdalssandur – a vast expanse of volcanic black sandplain, formed by eruptions from another popular Icelandic volcano, named Katla, which resides under the Myrdalsjokull ice cap, and which is, surprise surprise, also due for an eruption.

The longest drive of your journey continues on into the world’s largest sandur, Skeidararsandur, the sandur that gave all sandurs around the world their name, as you head further south east. Remember to plug in Icelandic rock band, Of Monsters and Men, for some moody rock to match the atmosphere.

Reach Hotel Smyrlabjorg – a family-run country hotel that serves up huge portions of food for dinner and breakfast. Attempt no. 1 at a Northern Lights viewing.

Set off towards Jokulsarlon glacier lagoon and take the boat ride. Often seen in official shots of Iceland, well it’s no wonder. Hearing about 1000-year old glaciers, breaking off and crashing into the lagoon, floating silently towards the ocean, well, that’s just the tip of the iceberg (geddit?). But seriously, you do only see about 10% of the iceberg.

Cross the road to the black sand beach across the Jokulsarlon where the Atlantic Ocean awaits the icebergs from the lagoon. The volcanic black sand and rocks made up of ice – well, that is a stunning sight indeed.

Start driving back westwards. Visit Skaftafell National Park. You can take a 1.5 hour hike, if weather and time permits, to see the beautiful (Black Falls) Svartifoss as she splashes her way down past basaltic hexagonal columns.

Along the way, you will see other beautiful falls, Skogafoss, Faxi, Systrafalls, and quaint country homes and churches. Stop for lunch at a petrol station stop.

Reach your destination for the night, the beautiful horse ranch hotel of Eldhestar in the geothermal hotspot region of Hvergardi. Arrange for a morning horseback ride before you try for Attempt No. 2 to view the Aurora Borealis.

Enjoy a “tolt” with the charming and super-friendly Icelandic horses before setting off west to reach Iceland’s most famous trio of sights, the Golden Circle.

*If you’re visiting in Summer, before you head off towards the Golden Circle, you can visit the Hvergardi National Park which boasts beautiful hiking trails, a chance to cook eggs and bake bread using the geothermal heat and rejuvenate weary feet in a straight-from-the-earth clay pool.

The Golden Circle comprises Gullfoss, Geyser and Thingvellir National Park. See my Golden Circle post for more information. They are relatively near each other, and you would probably make the park your last stop, before heading back to Reykjavik.

Along the way, you might want to visit a geothermal power plant, Nesjavellir, to see a real world application of how Iceland harnesses the power of its natural elements.

Well, this geothermal power plant, Nesjavellir, is like none other. First off, this is the plant that provides heating and hot water to Reykjavik, taking its source from the geothermal energy in an area that is directly connected to active volcanic regions of the country.

Secondly, it’s an amazing drive up and down into the valley, along the way our guide even pointed out Bjork’s summer house, and eventually you reach a lookout point from where you can see the natural steam rising from the plants and for us, a perfect ending to the trip as we saw a gorgeous sunset across the mountain range.

We had Johann from IC Highlands as our experienced and passionate guide. I would recommend getting a local guide so that you can really hear personal and historical stories that will make the drive all the more wonderful.