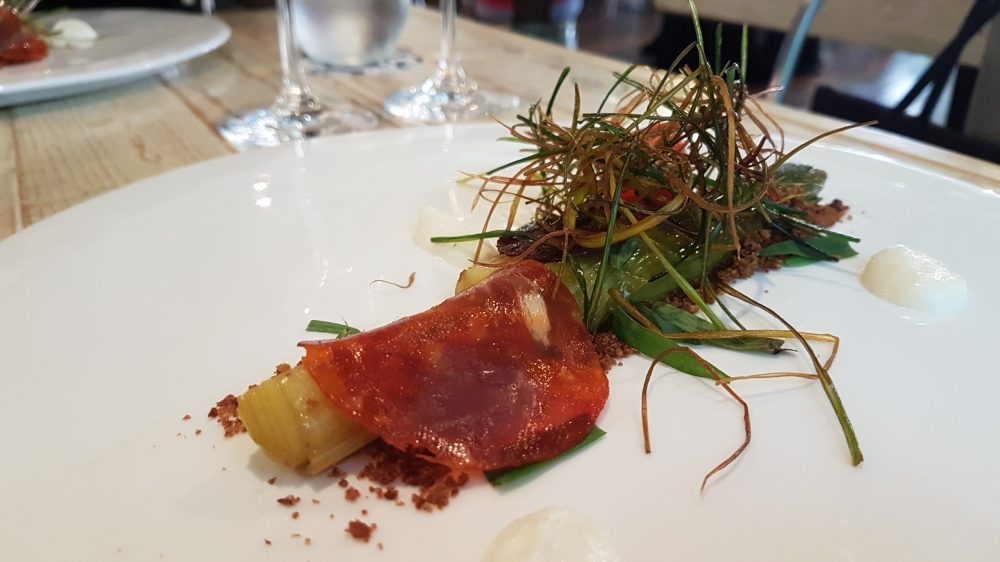 Audace, inspired by the word “audacious” isn’t quite the brazen-faced swashbuckler one might expect. I’d say more bold than brash, the dishes here are tinged with just that bit of daring. Located at what used to be Cocotte at the Wanderlust hotel in Little India, Audace is helmed by Jeremy Gillon who has headed and worked at a number of Michelin-starred restaurants in France.

His passion for supporting local is clear – he shops daily for his ingredients at the granddaddy of all Singapore markets, Tekka.

With that bounty on offer, it’s no wonder chef Gillon is inspired to change the set menu every couple of weeks or so.

I dined at Audace last week for lunch and at the end of it, I would wholeheartedly recommend it to anyone. For just $28 (2-course) or $34 (3-course), you get a tasty and satisfying meal that really showcases Audace’s creative style. And by the way, freshly baked bread with salted butter is generously served unlike most places that serve set lunches at this price. The rather plain-vanilla sounding Leek salad with Smoked Cream didn’t quite call to me, but the other option was a Pumpkin Soup, and I am not a fan of soups in general, so I had no choice but to select the leek.

As it turns out, the simple leek was transformed into something quite special thanks to the perfect char on the leek strips and the accompanying smoked cream. Together with the salty chorizo iberico and aniseed-like crumbled carvi, the dish was packed with flavour. My hubby chose the Seabass – a shining example of local ingredients featuring market-fresh seabass with water chestnut and chestnut mash. Chef chose to dot the plate with some coffee syrup – coffee and fish? It worked. I went the heavier route with a Duck Breast. Again, a perfectly prepped piece of meat, the duck was moist and the fat was well-rendered. The hint of garlic came from the use of ail des ours, a type of plant with a taste similar to chives, native to Europe.

Another example of the generous attitude of Audace? All mains are presented with a complimentary serving of polenta – we had a creamy squid-ink version that day. Once again, on the menu, dessert sounded uninspired – it just said Mandarin and Kombu, but once again, I was proven wrong. What appeared was a pretty plate of sunshine, topped with a caramelized orange slice, served on a bed of rich cream. After ordering just one dessert, we enjoyed it so much, we tried to order the other dessert on offer, but were just a little too late. The last one had been taken up by the table next to us.

Oh well, now we know for the next visit then – not to judge the menu by its simple descriptions but to just put our faith in the chef that he will deliver something special!

Looking forward to another meal at Audace in the new year. Happy New Year!