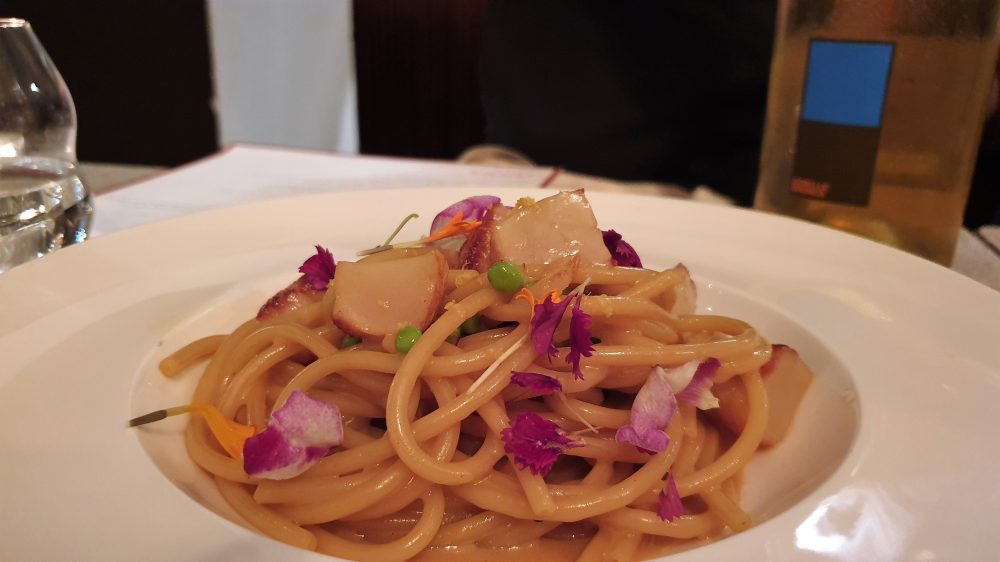 If the thought of stuffing your face with copious amounts of pasta doesn’t intimidate you, then Bar Cicheti is for you.

I’m not a fan of pizza so I’ve yet to visit the “original” venue of Cicheti at Kandahar Street which prides itself on its wood-fired pizzas.

Lust after pasta, however, that I do. So off I went to a tasting at Bar Cicheti at the Keong Saik area, not expecting much because… oh, heavens forbid, they don’t feature an Italian chef. In fact, they feature a local chef who has yet to step foot into Italy and unabashedly mentions YouTube as his secret ingredient.

But, my hesitation was quickly assuaged by the mélange of pasta dishes that came my way. They are in no way typical, often featuring a mixed bag of ingredients, perhaps sacrilegious to faithful Italians, but in the spirit of incorporating local and regional, it all works.

Making it all the more exciting is Peruvian-Japanese sommelier, Ronald Kamiyama, who has created some funky wine pairing options that is sure to wake up any jaded pinot lover. Even one such as I, who regularly worships at the temple of Bourgogne.

So, let’s start the rundown!

(Oh, you might want to eat something before you start reading, the post is lengthy and sure to create some rumblings in the tummy)

SALVIA FRITTA (S$8), aka fried sage leaves. Something different to snack on as you have your aperitif and we had the NV Domaine Amirault, Les Quaterons Brut, Crémant de Loire from France. There’s a salinity to the bubbly that matched really well with the crispy, salty, addictive deep-fried leaves.

BURRATINA (S$25). You wouldn’t expect burnt onion marmalade on your burratina which is how Bar Cicheti serves it. And while I enjoyed the rich, creamy, smooth mozzarella and cream ball, it was the homemade jam that stole the show.

The bubbly served us well for this dish as well, since in addition to the salinity, it also has a rich, fresh mouthfeel that complimented the creaminess of the cheese.

ASPARAGO (S$15) from Bar Cicheti’s Spring Menu. The spears had a good char, with a buttery soffritto that had been sautéed with bacon and a creamy ricotta sauce adding more depth to the dish.

What was interesting though was the wine pair, a barrel-aged white from Hungary, the 2015 Holdvölgy, Vision, Tokaj. I’ve not ventured into the Hungarian path yet, but if what I tried that night is any representation, then I’ll certainly be keeping my eye out for other Hungarian wine producers.

POLPETTE DI MANZO (S$15). Yes, meatballs! And meatballs that are moist and tasty, thanks to Chef Aun’s special blend of beef brisket mince, mixed with a little bit of milk-soaked bread.

To go with the tomato paprika sauce, we had the 2016 Château de Trinquevedel, Tavel, France. A Rose not from Provence? Yes, in fact, in the Tavel appellation of Southern Rhone, they are allowed to only produce Rose, that’s how focused it is. The red fruit notes went really well with the rich meatballs.

LINGUA DI MANZO TONNATO (S$18). The last time I had beef tongue, it was at Kilo Kitchen where it was in the form of tacos. I really like the version at Bar Cicheti though. The beef tongue is braised till tender, then seared for a nice char and topped with a spread of caramelised onions. It would have already been wonderful just like that, but the inspired addition of Tonnato aioli – a classic concoction of mayo, extra virgin olive oil, tuna in olive oil and anchovies, made it super.

Here we had another wine from the Rhone, a 2016 Éric Texier, Brézème, Côtes du Rhône Syrah. Made from 100% syrah, it’s fresh, peppery, juicy and matched well with the rich dish.

And now, for the Carb Overload at Bar Cicheti!

SPAGHETTI (S$28) in a pesto sauce made of…  jalapeño? So instead of the classic basil/parsley mix, Chef Aun uses the citrusy heat of jalapeño with ricotta,  chopped pistachio and toasted pine nuts. Definitely give this unique dish a try!

And drink the 2015 CVNE, Monopole Clásico Rioja while you’re at it. This Spanish Rioja has manzanilla sherry introduced to the barrel aging process, resulting in a nutty characteristic that lends itself beautifully to the roasted nuts in the dish.

Then, one of my favourites of the night, the BUCATINI (S$30) with Hokkaido scallops. I loved the addition of saffron and citron zest in the dish. A haunting scent as only saffron can impart and because the pasta is cooked in Osmanthus-scented water, there are floral notes to the dish too.

And for this dish, the NV Sorelle Bronca, Sole Cielo Terra, Veneto, Glera did a fine job. This unfiltered Pet Nat has the strength and acidity to match the saffron and citrus presence in the dish.

PACCHERI (S$20/34) with slow-braised spanish octopus. This is served in a puttanesca sauce of fresh tomatoes simmered long and slow, with fiery flavours of chilli, anchovies and capers. To go with the heat in the dish, we had a 2016 Frank Cornelissen, Contadino from Etna Rosso, and you guessed it – the volcanic soils of this region make a robust red that helped with the touch of heat in the dish.

And another favourite of the night, the AGNOLOTTI (S$19/29) featuring a ten-hour braised grass-fed beef cheek. How luscious each little pocket was! The beef cheek is silky smooth and with the parmigiana that it’s stuffed with, the pasta is just so unctuous. For this, we had the boldly tannic 2006 Tenute Sella, Lessona, Alto Piedmont, Nebbiolo blend.

The last pasta dish PICI CACIO E PEPE (S$18/28) is best shared as you’d want just a couple of forkfuls to appreciate the ode to Sarawak black pepper that Chef Aun has done with this dish. It appears deceptively simple, but it’s got a good balance of pepper with fresh marjoram, pecorino and a squeeze of lemon. Here, we had the pepperiness of a Sangiovese matching the hero of this dish – the 2010 Villa Mongalli, Montefalco Rosso, Umbria, Italy.

Just the other day, hubby and I were saying that it had been a while since we had a good cannoli. So I was thrilled to see that CANNOLI (S$14) was on the menu at Bar Cicheti.  This was a classic cannoli using marsala wine-infused ricotta, candied citrus, cranberries, chocolate chips and chopped Israeli pistachios. I like that the shell was thinner and crispier than the usual doughy types.

We also had the egg-nog TIRAMISU ($14) with amaretto-soaked savoiardi biscuit. Both desserts were complemented with an Amaro.

I was thoroughly satisfied with my meal at Bar Cicheti. Some of the dishes were a refreshing take on the classics, matched perfectly with some gutsy wine pairing choices. I will definitely be heading there again one day soon, this time with a couple more tummies to help partake in the feast.