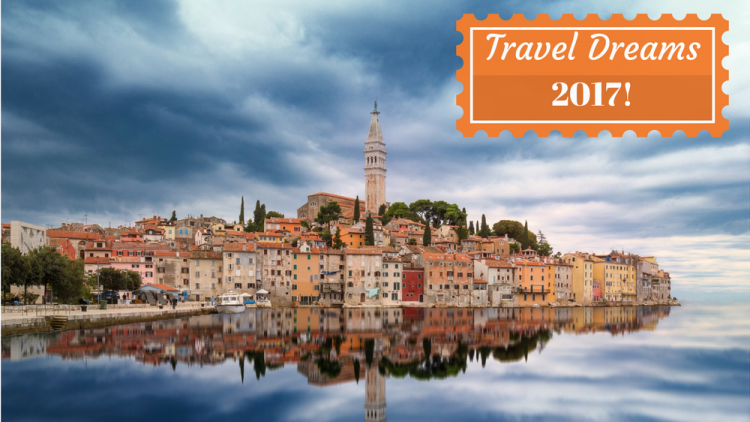 As the year rolls into another, one hopefully filled with glorious hope, I am already dreaming of where to travel to in 2017.

Yes, I have been keeping an eye out for what the bigwigs of travel predict to be the best travel destinations for 2017, but my list isn’t so much about which country is celebrating its birthday or hosting which huge event.

My list of best travel destinations 2017 centres around places with more personal stories attached to each of them.

So, hop on, and enjoy daydreaming with me!

Polar bears. My hubby and I just adore them. Perhaps not so adorable if we ever came full frontal with one but really cute, from a distance.

So when I saw a tour called Spitsbergen and Polar Bears, I couldn’t help but check out Svalbard.

Now, the thing to note is – I have an obsession with the great, white expanse of Scandinavia. I can’t help it. Ever since I made my way up to the Arctic Circle via Abisko, Sweden, I’ve just fallen in love with the bewitching calm that comes along with the vast emptiness.

I’ve yet to visit Norway though, and if I could, I would go as high up as I could – to Svalbard. This archipelago is home to the world’s most northernmost inhabited place where a cruise around to the highest geographical north (80th parallel) you can go to on open water, might just see you stumble across a polar bear.

Knowing my ass luck, that probably won’t happen, but the chance to go as far up North as possible, gaze upon its endless pristine glory and to experience the midnight sun for days is appealing to me.

And on the opposite side of the poles, we have Antarctica. Yes, clearly I am a person of extremes.

But again, it is the remoteness. The chance of seeing nature’s best magic show, the Southern Lights. To chill out with a colony of Emperor Penguins. To marvel at Ice Waves and Ice Caves. It’s simply inexplicable.

And with a fancy newly-renovated resort (did I just say resort? On Antarctica? Geez!) like the White Desert, I have serious Antarctic wanderlust!

At 64,000€ per person for an 8-night adventure, most (including myself!) would baulk at the cost. It’s probably going to remain a dream for me, but lucky you if you can make it there! Still, if I didn’t have to be so dramatic, I suppose I could settle for New Zealand.

The last time I was in NZ was probably 30 years ago. Travelling then meant walking around like a lost lamb while your parents did the more obvious touristy things (memories of sheep shearing come flooding back to me).

Being from Singapore, Australia and New Zealand were not exactly very distant, exotic places to me. They were  places just in my backyard, at least, that’s what I thought.

It took me this long to discover just how much I love nature hikes, so suddenly, this not-so-little place in my backyard is looking mighty compelling.

If you’re lucky enough to find yourself in the world of the Rings, just watch your breath get taken away by the mountains, glaciers, lakes and fjords of the South Island. Mt Cook, Lake Wakatipu, Tekapo, Wanaka – these are must-dos on any visitors list and for any oenophile worth his grape, a pilgrimage to the land of one of the world’s most popular Sauvignon Blanc, Marlborough, is a must. Maybe the last season of Survivor was the best tourism ad Fiji could have asked for. Marooned on an island, having to face the wrath of nature, no food and no sleep for 39 days?

Puh-leez. The way the cameras picked up the viridian hues of the waters with its stunning overhead shots, it’s as though the Fiji tourism board had sponsored the show.

Sky dive or shark dive, white-water raft or waterfall trek, snorkel or snooze – there’s no denying the unmistakable beauty of this archipelago of 300 islands.

Rugby fans would already appreciate the Fiji national team’s prowess in the Rugby Sevens and this year, the country saw its very 1st Olympic Gold medal win in what else, rugby.

With the recent flight promotions I have been seeing on flying to Fiji directly from Singapore, perhaps now is as good a time as any to get a slice of that paradise. And then there’s Madagascar. If only to say that word, I’d head over in a heartbeat! Doesn’t it just sound like such a quirky, unique place?

Still sticking with my spellbinding natural beauty theme, Madagascar can take you on a visual escapade through canyons, deserts, forests, hills and mountains.

That, of course, includes the lemur. Which is probably my real reason for wanting to visit Madagascar. Which is to get my hubby, Julian, to sing that song. You know, the one inmortalised by a certain groovy lemur called King Julian in that Dreamworks Animation movie, Madagascar.

And with a new eco resort, Miavana, due to open soon, I would be keen to check out some of the conservation-led initiatives which visitors can also be part of. Helping the environment while enjoying it – perfect! Speaking of fauna and flora, Costa Rica boasts one of the world’s most bio-diverse environments. About 25% of the country is protected parks and reserves and its geology allows you to tramp around a tropical rainforest one day, and gaze upon an active volcano the next.

Bordered by the Caribbean and the Pacific on either side, beach hopping is a great idea, whether on foot or by boat – do this while eating capo (shaved ice with kola syrup and condensed milk).

Adrenalin junkies have their fun too with adventure trails, surfing and wild white water rafting aplenty. If you’ve always wanted to rappel down (or simply jump off!) a waterfall, this is the place to do so!

As for me, I plan to get my fix of thrills ziplining through the tropical cloud forests of the country, followed by relaxing in one of the many hot springs that dot the country! My interest in Israel was a result of watching an eye-opening Israeli movie about, what else, food during this year’s FoodCine.ma. It was called In Search of Israeli Cuisine and as I am always searching for new tastes and styles when it comes to food, it definitely was a fascinating journey for me.

Couple that with this year’s World Gourmet Summit showcasing the skills of Chef Meir Adoni and I was left thinking the gourmandic force was strong with the Israelis.

Tel Aviv featured prominently in the movie, with lots of progressive chefs showing off their thought processes, but these days, Jerusalem is giving the beachy city a run for its money. With new restaurants popping up melding Jewish and Arabic influences, this holy city certainly seems to be ready for a culinary wave.

In fact, Jerusalem is featured in several Best Travel Destinations 2017 lists out there, so something to think about for sure! Again, it was a food show that awoke my interest in Croatia. While this is already a very popular destination, among young and old alike (seems like a lot of people I know have already explored this place), it has taken me a while because there are just so many other places around the world, isn’t there?!

But watching Taste of Croatia on telly and being bombarded with images of fresh seafood and beautiful coastlines makes me want to book that trip, stat!

In addition to all that eating, must-dos on my list would include sailing around, exploring some of the over 1,000 islands in Croatia, enjoying the charms of medieval hilltop villages in Istria and exploring its national parks. Most people don’t realise that Croatia is really close to one of the world’s most popular tourist destinations – Italy. Venice is just a couple of hours across the Adriatic by ferry.

Not if you’re heading farther south though. Which is where I would like to go, considering I have already checked off the other major spots on “mainland” Italy.

Where once thoughts of the Mafia invaded my brain when I thought of Sicily, now it’s thoughts of cannoli and arancini balls that come to mind.

I can just imagine walking around the bustling streets of Palermo, watching as nonnas go about their daily marketing and appreciating the confluence of African, Arabic and European cultures.

I’d probably pop over to its neighbouring island, Sardinia, to explore its beautiful beaches and fabulous cuisine. The ferry crossing is rather long (about 12 hours) but I am sure it will be worth it! Scotland isn’t new to me. About 20 years ago, I had stumbled into Edinburgh from London, but that was it.

Even though it was only a couple of days, I fell in love with the city, the warm glow from the omnipresent Edinburgh castle lighting up the skyline.

Of course, a short visit to Edinburgh doesn’t do justice to Scotland at all. I’m dreaming of a countryside road trip, heading up farther north toward the highlands, going past glens (valleys) and lochs (lakes).

And then, of course, there’s the food. Plenty of buzz surrounding the awakening of Scottish cuisine, not just in stately Edinburgh but also in its grittier cousin, Glasgow.

So, step aside haggis and black pudding – squeamish eaters like myself are on the way! There you have it. My very own wishful-thinking dream list of Best Travel Destinations 2017. What’s on your list?