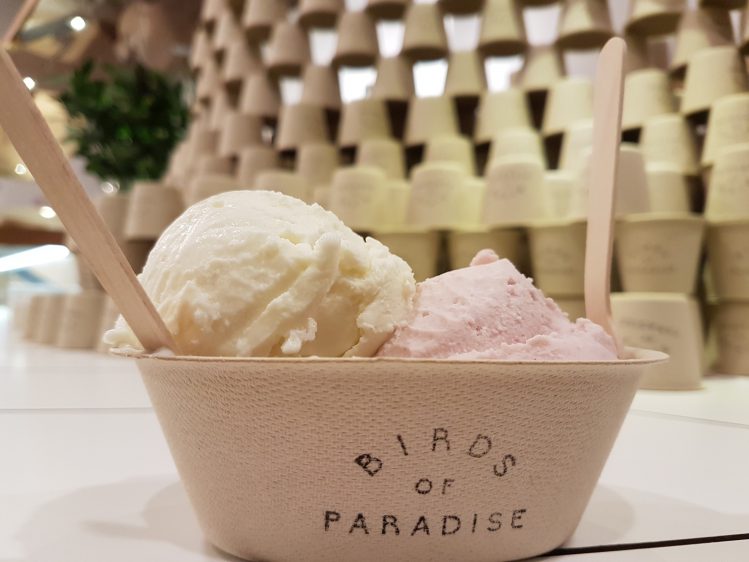 Pastel princes and princesses – I know just the gelato place for you! Birds of Paradise at Katong is all about “botanical” gelato, and they aren’t kidding on that.

One look at the gelato on display and you’ll immediately notice the subtle colours with very “au naturel” sounding flavours. No garish, neon-coloured, artificial looking mounds of ice cream here. Now, being a chocoholic, I normally would scan for anything chocolate, so I was a little apprehensive when I didn’t see any on display.

Still, I went bravely forward and decided to sample a few flavours. I love my spices and the Spiced Pear sounded suitably adventurous, so I tried that first.

It is good! The star anise really gave the sweet pear a kick up its butt and the cinnamon subtly added a nice warming feeling to the gelato.

Then the Strawberry Basil, two ingredients that already go well together. What I liked about this is the light touch they used to infuse the basil – so that the strawberry is still the hero in the pairing. The next time I visited Birds of Paradise, I ordered the Thyme-infused cone (additional $1), based on the rave review that a friend had given me.

Well, I think in this case, I would have preferred more of the thyme infusion as I couldn’t really get the flavour at all. But the cone itself was warm (they are freshly made to order), crunchy and had a nice caramel-like tinge to it.

The gelato I had with the cone? A flavor combination I have hated since childhood days – mint and chocolate! Yes, I am a chocoholic, that’s why I am very particular about what they do to my chocolate!

Thankfully, Mint Cacao wasn’t really a mint/chocolate ice cream. Just imagine the scent of fresh mint in all its herby glory infused in a creamy vanilla based gelato with sprinklings of cacao nibs. It was really more about celebrating mint, so it definitely did not bring back any nightmares of After 8s! I know that if I am in the mood for a more subtle, unique kind of ice cream, Birds of Paradise is definitely the place I would go to. Also, I was informed that the White Chrysanthemum was a best seller, so I’ll be sure to order that the next time I visit!