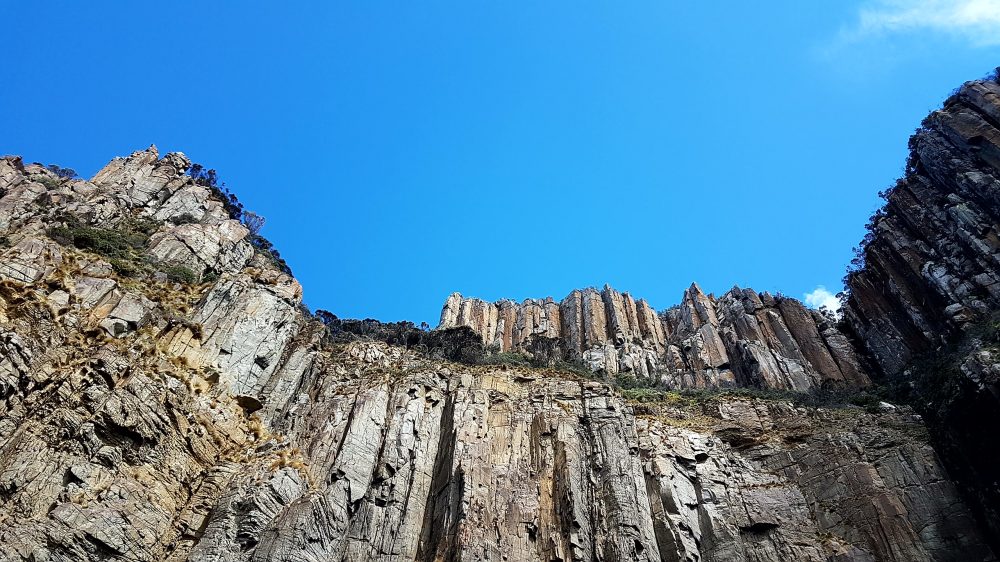 Next stop: Antarctica. Not quite, but with the Bruny Island Adventure cruise, you will go all the way to the southern tip of the island where the mighty Southern Ocean meets the Tasman Sea.

That was also the point where the wind was blowing so hard, I decided to forego my hood and my sunnies (for fear that my lenses would crack, it was that strong!) and just let the wind slam onto my face.

Honestly, I am pretty sure my face was vibrating like what you see on the faces of skydivers as they hurtle towards land.

In a twist of fate, by the time I was experiencing the strongest and coldest wind of my life, I was no longer afraid.

That dastardly southern wind probably numbed me out of my senses, so maybe that’s why I didn’t feel any more fear. Just enjoying a breath of fresh air!

It’s quite a big deal, this. I am deathly afraid of boat rides out in the open waters. Could be a river, sea, hell, even a lake (like when I was at Jokulsarlon, Iceland and we took the amphibious boat out onto the glacier lagoon).

Well, okay, I wasn’t “deathly” afraid of the Icelandic one, after all, it was just a skim around the lagoon’s surface.

This Bruny Island Adventure cruise, on the other hand, lives up to its promise of letting you “experience the awesome power of the mighty Southern Ocean” – that’s what the brochure said.

The skipper and his one-man crew also hammed it up, making it very clear that we were about to enter dangerous waters.

With a twinkle in their eyes, of course. So, there I am, sitting on the open-topped, purpose-built Naiad boats, nicknamed the 4WDs of the sea, and wondering several times during the 3-hour “cruise” if I had lost my marbles.

But well, if the 20 other people on the boat could hack it, I certainly wasn’t going to just curl up and burrow myself deep into the earth like some echidna.

They gave out ginger tablets to anyone who needed it pre-ride. To quench any potential seasickness. Which most people gratefully accepted. All, but me.

I never get seasick. I think that’s because I am so terrified, I am all tensed-up, and I have absolutely no slack to sway along with the bumpy boats.

The journey started out “relatively” smooth enough. As our skipper explained, we had 4 “stages” to get through. He was kind enough to do it in increasing order of bumpiness. Thanks, mate. Really…thanks.

Anyway, we all had the charming crew member, Jeremy, to fix our gaze upon while the boat was crashing onto the waves. He was like my totem pole. Anytime I felt freaked out, I just looked at his steadying figure. Which stayed steady even when sea spray decided to give his fluffy hair a retro Brylcreem wet look.

(Brylcreem was mentioned by his more “senior” partner in crime. It’s not the kind of analogy a young one like me would think of, of course).

As the boat zipped along, we witnessed the turquoise waves slapping against the rocky cliffs, wind and sea-carved sea caves and strange sea stacks rising up from the ocean. We were hoping to also witness the annual migration of whales but didn’t have any such luck. Neither did we have any dolphins accompany us on our journey.

We did manage to see seals lounging on the cliffs though. And we most certainly could smell them! Think a combination of salmon and manure.

As the boat headed further south, we spotted the now-defunct Cape Bruny Lighthouse that was built by convicts in 1838 and Australia’s second oldest extant lighthouse tower.

After our exhilarating ride out on the sea, we returned to land, most of us feeling as if we had conquered something. Well, if not Antarctica, our fears. In parts, at least. 🙂

Of course, my way of recovering from all that excitement was to immediately head towards Get Shucked Oyster Farm where a dozen bi-valves and some bubbly did the trick. On that food note, Bruny Island is home to some of the finest and freshest produce you can ever try. From cheese to chocolates, wines to whiskies, a day can be spent sampling what this island has to offer.

It is easy to get to Bruny Island. A car ferry from Kettering (30 minutes drive from Hobart), gets you across to the island, where if you’re sticking to the main “road”, you shouldn’t have any problems with your car.

You could, of course, take one of the many tours to Bruny Island, which might be a good introductory session as they would explain about the island’s diverse microclimates, unique wildlife and farming prowess etc.

Asides from being a bird-watcher’s paradise, as Bruny Island has 12 Tasmanian endemics amongst the 150 species of birds, you can also spot the rare white wallaby and if you time it right at night, a visit to The Neck will reward you with the nightly fairy penguin show. The Neck of Bruny Island is its single most popular geological feature. A long, thin strip of land connects the North and South of the island and a short climb up rewards you with fantastic views of the island.

The next time I visit Tasmania, I would probably want to spend a night on Bruny Island itself. Accommodations are aplenty, ranging from camping to beachfront luxury apartments.

I might even muster up a 2nd dose of courage to take that adventure cruise again!

Also, check out my Tasmania Road Trip – The Ultimate Guide and Top 9 Experiences in Tasmania stories for more ideas for your tassie adventure!