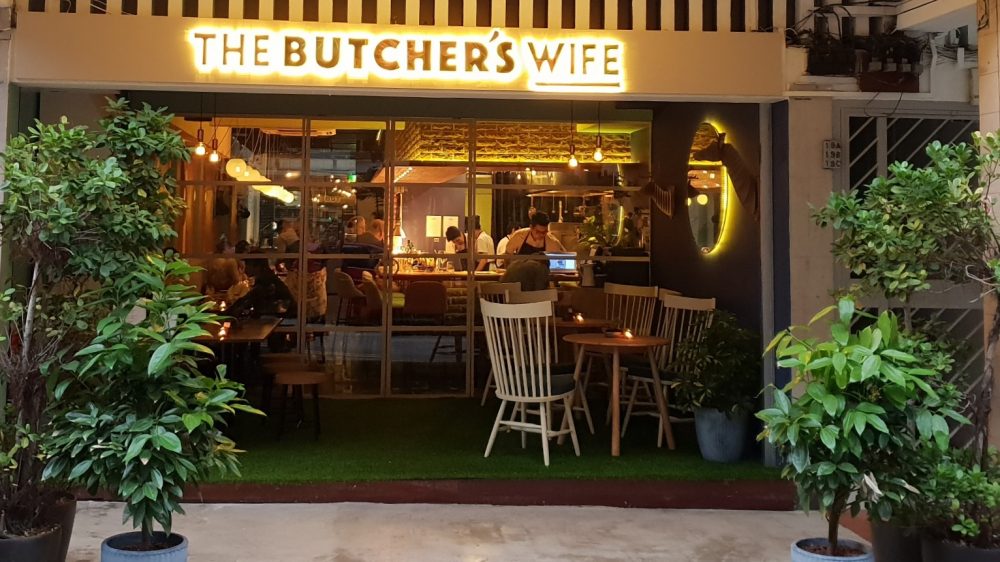 The Butcher’s Wife has been running their popular 5 Bites, 5 Wines monthly dinners for some time now, but I only finally discovered what the fuss was when I dined there last month.

Chef Mariana Campos D’ Almeida expresses her Brazilian heritage and fermentation fascination with a good melange of Asian influences in her menu. I went from Brazil to India to Thailand during the 5-course meal.

In truth though, I was there more for the wines, as the session billed itself as a chance to try some really under-the-radar natural wines. And I am all about learning about grapes I have never heard of before.

The wine pairing was managed by Eduardo Bayo of the Drunken Farmer – I suppose one could say he is the natural wine world’s version of a travelling salesman… but of course, much more than that.

He was totally on point with the pairing, and is a great treasure trove of knowledge about natural wines.

The next 5 Bites, 5 Wines will be on 18 March, and the price for the reasonably-priced wine-pairing 5-course dinner is $65++. Oh, and I have to say again, this restaurant is 100% gluten-free, so there you go – all my gluten-intolerant friends, you can eat all the pasta and breads there without fear.

Here’s what went down at the February session:

Crepioca – a Brazilian snack that is a mix between crepe and tapioca. Like a banana, chilli jam and cheese filled version of a samosa.

Peixe no Tucupi – another Brazilian dish. Called a tiradito, this version was cured with fermented cassava juice. I liked the little pops of flavour she added to the dish courtesy of the pickled wing bean (sweet), laksa leaf oil and Sichuan pepper.

Paired with a varietal I had never heard of – a Mauzac. The Laurent Cazottes, Marcotte 2017 from the South-west of France. Strong apple aromas, and was to cut the oiliness of the dish.

For this, it was only right that they paired with a Gewurztraminer, my wine of choice for Indian food. Here, it was an orange wine from Alsace, the Domaine Christian Binner, Le Scarabée Skin touch 2016. The mix of Gewurztraminer, Muscat and Riesling gave a fragrant aroma that matched the dish.

The last time I was at The Butcher’s Wife in 2018, I remember eating the beef and thinking it was delicious. Well, the Brazilian influence is strong here, this time again with the wagyu that was done just right, leaving a tender, tasty, very authentic taste in the mouth.

The chef paired it with baby bok choy, this I wasn’t a fan of. But who cares… the meat was good.

Meanwhile, the wine pairing was super – the barnyard aromas (yes, sounds strange but it’s really not) matched the whole idea of the dish perfectly!

And finally, inspired by her trip to Bangkok where her mother questioned the possibility of mango being eaten with rice, chef Mariana decided to showcase this classic combination in the dessert course. It was her 1st time trying it in Bangkok and she fell in love with the Mango Sticky Rice there, and she certainly did justice to it in her interpretation here.

For this, we were lucky, we had not just the dessert wine listed on the menu, but another special one as well.

It was good to compare the two, we preferred the more “basic” (though, I’m sure it’s not but it’s just that Eduardo raved about the other) 2013 Gerard Bertrand, Muscat de Rivesaltes for its harmonious balance of fig and honey, not too sweet or overpowering.

The special one he brought out, the 2011 Domaine Christian Binner, Blanc de Noir Cuvée Excellence, had a deep, rusty robe, very enticing, and aromas of dried fruit and raisins – also lovely, but taste is always personal.

Long live 5 Bites, 5 Wines and may they continue serving up more of such exciting pairings and creative dishes!

All my gluten-fearing friends can now make an appointment with The Butcher’s Wife for sustenance.

Taking over the spot formerly occupied by another Spa Esprit Group restaurant, Open Door Policy, which interestingly was also heading down the GF path, so not sure why the cosmetic change and the closing of that door, but it doesn’t matter – gluten-free good times can be had at The Butcher’s Wife!

Banish those thoughts of cardboard bread and dodgy pasta. Those that I tried at The Butcher’s Wife were not bad at all.

I am not gluten-intolerant, so I would still want that chewy, stretchy feel of my favourite carbs, but for my poor, long-suffering GF friends, I would happily recommend to tuck into the nosh served up here.

Like the Chestnuts Papardelle ($25), in particular. It’s not going to be as al dente as some of us would like it, I think that’s probably a function of the no gluten, but the 8-hour braised wagyu osso bucco sauce with roasted hazelnuts is yummy, and with a glass of red in hand, life is good.

Oh speaking of wine, they (naturally) have a good range of natural whites and reds to try as well.

I wouldn’t waste my carb count on the Baked Focaccia ($9) – that’s only because I prefer my chewy bread, but if you’re gluten-intolerant, this is a good alternative. The bread is topped with caramelized onions and semi-dried tomatoes.

But The Butcher’s Wife isn’t just about how many ways one can feed someone gluten-free carbs. As you might have guessed by the restaurant’s moniker, you can expect options that would please the keto crowd too. Like this Argentinian hunk – I mean, the Grilled Ribeye Steak ($57). Looks don’t lie, it was delicious and so were the “triple-cooked” fries – steamed, confit and fried.

The Roasted Chicken for Two ($55) was nice, great jus and all, but what I liked was the cannelloni. It said “chicken trimmings” and morel in the stuffing – I don’t need the deets on the exact trimmings but it was all very moreish. Think they should just serve an upsized version as a standalone dish.

Now, I’ve jumped straight into the mains, but the appetizers have a couple of standouts as well. I especially enjoyed the Kale and Gorgonzola “Bunuelos” ($14) with saffron aioli. It’s crispy, fried balls of kale with a light (thankfully) touch of blue cheese.

The Butcher’s Wife did their Grilled Octopus ($28) differently. Served on a bed of celeriac foam with tuna mayo, it’s an interesting change from the usual, more straightforward Mediterranean style.

Finally, the desserts! Another test of how successfully The Butcher’s Wife could execute their gluten-free cooking.

So, yes, whether I am gluten-free or not, I can see myself returning to The Butcher’s Wife to enjoy a couple of their interesting and tasty dishes. And to kid myself that I am being healthy.