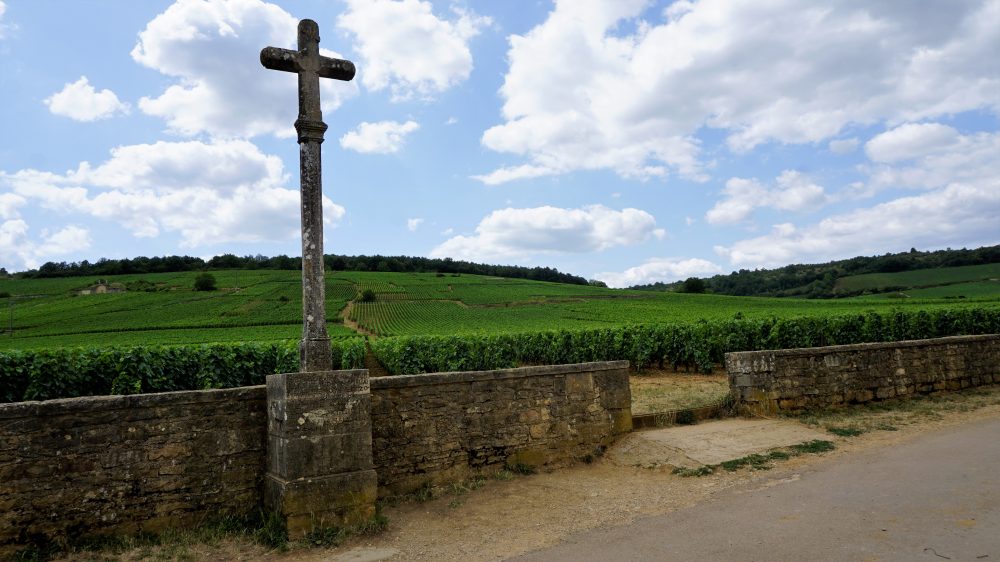 I love my Burgundy. To me, a fine glass of red Burgundy is akin to silky velvet coating my mouth, imbuing it with tiny red fruit notes, tinged with slight floral perfumes, leading into earth, the very terroir that this wine comes from.

Overly dramatic, sure, I hate the verbosity one often encounters with wine descriptions but hey, when it comes to Burgundy… 😊.

Well, I finally made the pilgrimage to this Holy Wine Land, and boy, was it everything I had dreamt of. Miles and miles of carefully-plotted vines, neatly arranged like sentinels along the slopes and teeny country roads where I really don’t know what would happen if a tractor came towards me from the other side. And wine, wine, wine everywhere!

You can’t walk 5 steps without passing a caveau or wine boutique in Burgundy. Whether you’re in Beaune, the wine capital of Burgundy or in one of the villages such as Gevrey-Chambertin or Volnay, the spirit is unmistakable.

Most people choose to stay in Beaune and then traverse the wine countryside. I stayed 4 nights in Beaune and while convenient, the next time round, I’d split it in half and spend 2 nights in one of the sleepy villages – Puligny Montrachet, perhaps.

Still, it’s a snap to hit wine country from Beaune, a few turns and you’re deep in.

So let’s get this journey started!

Pick up a copy from the tourist office (well-located in Beaune across the Hospices de Beaune) and supplement that with something like Michelin’s Wine Regions of France. Frankly, Waze was our main mode of navigation while driving, it’s spot-on and easy to follow, but the book helps you pinpoint highlights that you can then use as your destination point.

The layman’s version is this: Chablis (standing on its own up north), the Cote D’Or (what I’d call the main drag of prestige), the Cote Chalonnaise (Mercurey, Givry, ring a bell?) and Maconnais (home to Pouilly-Fuissé).

This isn’t an official classification but it summarises the more well-known wine-producing areas.

We focused on the Cote D’Or – which comprises the Cote de Nuits (North of Beaune and home to the Route des Grand Crus) and the Cote de Beaune (South of Beaune producing famed whites).

You can drive the 60km strip in an hour, but really, that’s not the point. Peppered along your route, whether North to South or vice versa, you’ll pass signs to the most illustrious wine names around – Romanée-Conti, Clos de Vougeot, Chambolle-Musigny and so on.

You’ll be hard-pressed not to stop and sniff the air around you. And admire the plots. And take a selfie, of course.

The Champs-Élysées of Wine.

And now that we’ve got some semblance of the region, let’s pinpoint highlights. I’m no wine master, but I have a fair understanding of the wines of Burgundy, thanks to a previous job in a luxury wine company where I was in charge of the digital content, curating and publishing the content. Which meant many days spent poring through copy written by wine writers describing the wines of Burgundy.

So names of the villages and climats are familiar to me, and the ones that are “esteemed” helped shape which villages I wanted to visit. Driving along Burgundy’s Route des Grand Crus is really like driving the Champs-Élysées of wines.

I split the Cote D’Or drive over 2 days – one up north, the other down south.

Meaning to visit Pernand-Vergelesses for its panoramic view, we somehow ended up in Aloxe-Corton first. And ended up having one of the highlights of the trip – a picnic in the vineyards. See my Six Steps to the Perfect Picnic in Burgundy.

Off to Pernand-Vergelesses, and to be honest, the view is great, but pretty much the same as every view of endless green vineyards that you’d see from any high vantage point in Burgundy.

Beaune is “capital” of Burgundy wine country, and Nuits-St-Georges is “capital” of the Cote D’Or. While there are “museums” where you can learn about Cremant de Bourgogne and Cassis, we were in need of a good cuppa espresso, so we took a quick stroll around the town centre, had a shot, then zipped off.

Wine Focus: Nuits-Saints-Georges has no Grand Crus, and 41 Premier Crus.

Ah, the first class suites of the Grand Crus are all here. La Romanée-Conti, La Tache and Richebourg are names that evoke the great mystery of Burgundy. They produce some of the world’s best and most expensive wines.

Domaine de la Romanée-Conti produces only 6,000 bottles per year and is only sold by the case, each containing 11 other Burgundy Grand Crus and just the one Romanée-Conti.

Since it’s unlikely that I was going to taste a Romanée-Conti in my near future, I had plenty of fun prancing around the site.

And the list keeps going on. Another prestigious appellation, many view the reds of Chambolle-Musigny as being among the silkiest of Burgundy. We did an intimate wine tasting here, see my story on How to Taste Wine in Burgundy.

Technically, your next step would be Morey-Saint-Denis, which produces five esteemed Grand Crus but as we were running short on time (we had to make it to Dijon in time for our dinner at Michelin-starred Stephane Debord), our final stop for the Grand Crus drive was the village that produces some of my favourite Burgundy, Gevrey-Chambertin.

While the North is more about reds, the South is home to some of the greatest whites in the world. For us, this drive was on my hubby’s birthday, hence we took our time, stopped for a very long, leisurely lunch and didn’t visit too many places.

I will mention them though, as an overview.

Known for its bold reds, Pommard would be your 1st stop where you can visit the Chateau de Pommard and its park. We headed straight on to Volnay though to start the day with a panoramic view of the vineyards. Sit on the benches and just enjoy the silence and sights.

Wine Focus: Only reds, recognised to be silky and feminine. 34 Premier Crus.

Highlight: View of the vineyards from the church.

The world capital of great dry white wines. We had birthday lunch booked at the beautiful Le Montrachet, which we enjoyed immensely, just sitting by the gardens and sipping on our perfect wines.

It was nearly 2.30pm when we finished lunch, we considered doing a tasting at the nearby caveau but eventually decided against, and headed off to the neighbouring village of Chassagne-Montrachet.

We did a paid tasting at the Chateau de Chassagne Montrachet, and visited their 14C cave.

We were planning to visit Chateau de la Rochepot, a 13C castle on top of Nolay peak, but we decided to head on straight to Meursault as we figured we would have needed more time at Rochepot with its guided tours around the castle, and it was rather late by now.

If you have time, you can head to the southernmost end of the Cote D’Or and visit Santenay before heading back up towards Saint-Aubin, Saint-Romain and Meursault.

At Meursault, another appellation famed for whites, we did a tasting at the Chateau de Meursault. This time we were offered the rare chance to try a Grand Cru, and ended up buying the bottle.

No rush, just take your time…

You’ll notice that for most of the places, we didn’t do too many activities nor did we make a pit stop at every place that was mentioned because it really isn’t about doing everything. The most enjoyable was simply being at the locations where we had been enjoying the wines from when we are home.

The key is to go with an open mind, plot your path, stay longer at place if you feel like it, or just soak in the atmosphere and head on.

Useful links on Driving in France:

Enjoy your self-drive in Burgundy!