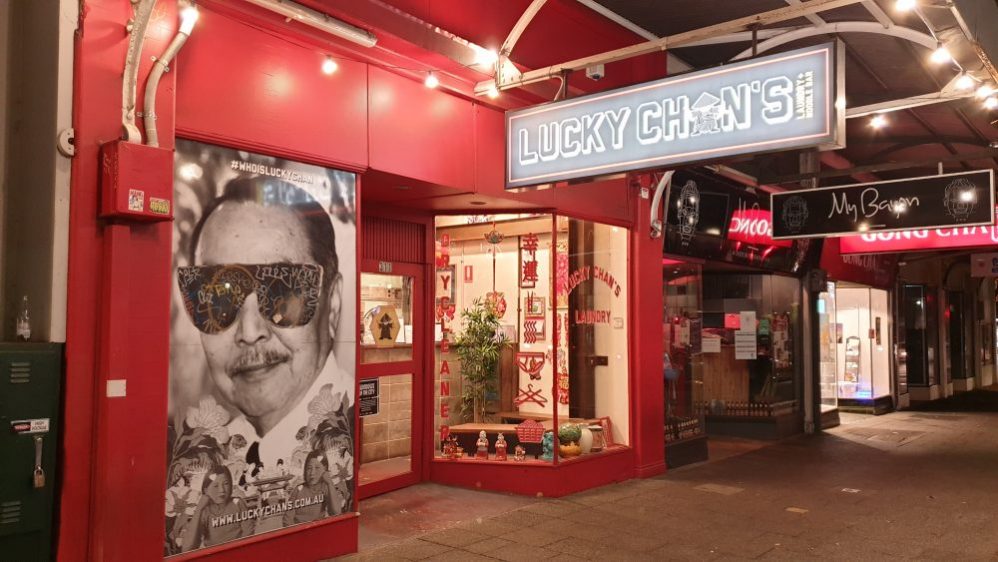 Without a doubt, Northbridge is THE area if you’re looking for hip, culturally-diverse places, the type of establishments with names such as Lucky Chan’s Laundry, No Mafia and Bangkok Brothers.

Rooftop cocktail bars face off with strip clubs and the streets do fill up with youth in various states of inebriation, but skip over the odd puddle of puke or so, and this is one buzzing hood in Perth.

Airing its dirty laundry is this bar and restaurant that’s kinda kitschy. You’ll see lion dance plushies hanging from the ceiling and an invitation to drop your dirty laundry off at its entrance.

The menu is noodles with a twist. Fun versions such as the Tamil Tiger which is egg noodles in a coconut curry broth with spiced mackerel and Mexichan that features chipotle and miso glazed tofu and ginger black beans.

Boss baos are the rage and you’ll find them here too. The food is fun, perfect for some late night vibin’ but don’t be a stickler about authenticity.

Another place that puts a spin on traditional cuisine is this Indian restaurant.

Pani Puri, the popular street snack, is given a tequila twist here and the humble Samosa is upgraded with a wagyu filling.

The curries span the range across India from a northern Mountain Goat Curry to a Kerala Pork Curry.

And all you lovelies who are experts in Indian food, yes, this isn’t going to blow your minds if you’re expecting really flavourful, traditional Indian food, but this is a great place to go to if you want to try something different with your pals.

Been Around World And Ay Ay Ay:

Walk down James Street, throw a stone and you’re bound to hit a Chinese restaurant. And if you’re hankering for pho, just walk down William Street and you’ll spot several Vietnamese options.

To round it all off, join the queues at Chicho Gelato – if you’re lucky, you might see unique combos such as Black Sesame and Banana! And of course, most of the concoctions are created using local produce from Western Australia.

{Also Read: If you’re heading to the wineries of Margaret River, check out my article on Margaret River Wineries You Won’t Want To Miss}

Asides from Sauma and Lucky Chan’s above that serve their own blends of smashing cocktails, below are other cool places for a tipple:

Up a narrow staircase guarded by a bouncer, and you reach this 60’s inspired bar. I don’t really see the influence but who cares. It has good cocktails and a charming rooftop area.

The refurbished three-storey Rechabite has a dive bar in the basement, a cocktail bar and restaurant on the ground floor called Double Rainbow and a rooftop bar with views over the city.

Another rooftop bar borne out of a converted heritage building. It’s atop Flipside Burgers so if that strikes your fancy while you’re imbibing on their cocktails, craft beers and artisanal wines, feel free to order from the bar.

We might be over bars needing passwords to enter, but hey, when you’re on holiday… it’s just another fun thing to do. Getting the password is easy enough, just get on the Facebook page of this secret bar.

And if you’re lookin’ for some Southern lovin’, this place has over 130 rye whiskies and bourbon to keep you company.

Two cosy cafés face each other on William Street – Mr Fox on William and Little Willy’s. Good food and good vibes at both.

Stick into the lanes that would be deserted by day, and wide awake at night – one narrow stretch before the intersection of James and William Streets is home to spaghetti bar Francoforte, Prohibition-themed bar Ezra Pound and Superstar Waffles, among others.

Where to Stay in Northbridge:

Because I had wanted to be smack in the middle of the action, I stayed at the funky Alex Hotel. It’s got boutique written all over it, from the pseudo lobby area that doubles up as a bar to the takeaway drinking water in a carton made of recycled materials.

Alex Hotel is smack in the cultural hub of Perth as well with the State Theatre Centre, the Perth Institute of Contemporary Arts and the Western Australia Museum and Art Gallery of WA round the corner.

It’s walking distance to the CBD and Elizabeth Quay where again, there are gems to be found. Such as one-hatted Lalla Rookh and Mary Street Bakery for delicious brunch.

So if you’re heading to Perth, and want to eat, play and sleep in the hottest hood, Northbridge is your go-to!

And let me know in the comments if there are any of YOUR favourites to add on to this Northbridge list!