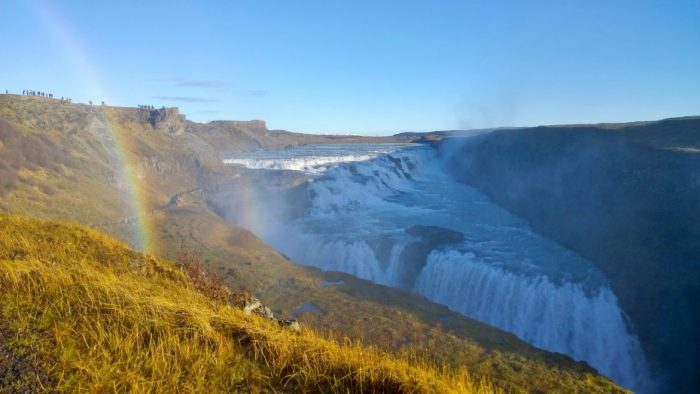 Just as how people would say it’s a shame to visit Iceland without going to the Blue Lagoon, it would be crazy to miss a day trip out to Iceland’s most popular tourist attraction – the Golden Circle.

(The Golden Circle is a marketing-friendly term encapsulating the three sights of Gullfoss, Geysir and Thingvellir)

Easily covered in a day, and with many tour/self-drive options from Reykjavik, the visit to these three significant sights and sites of Iceland is a must.

Our first stop was to Iceland’s most popular waterfall – the largest (by volume) waterfall, Gullfoss.

This double-edged waterfall is the inspiration for countless photographs, used by rock band Live for their video “Heaven” and more often than not, on sunny days, you can see not one, but two rainbows here.

Despite the fact that you’re likely to be surrounded by trigger-happy, selfie stick-wielding tourists, take a moment and gasp at the gush-worthy beauty of this waterfall.

Then from water that plunges downwards, we headed off to see the opposite – water that explodes up into the air, threatening to scald anyone silly enough to stand facing the wind, at Geysir.

Geysir, as you know, is the name for which all geysers are named after.

Unfortunately, Geysir has retired (not indefinitely though) and his neighbour, Strokkur, is the one putting on regular shows these days – almost every 5-7 minutes, it seems.

Watch in amazement as the water starts bubbling up, and then bam – eruption! And lots of gleeful screams from the surrounding tourists.

The final stop of our Golden Circle tour was the home of Iceland’s (and the world’s) first democratic parliament, Thingvellir National Park.

A tablet (of the rock kind, not an ipad) provides further information about how laws were passed, disputes were settled, a centralized religion was decided upon and so on.

Fascinating as it may be to read stories about women being drowned for witchcraft and men being beheaded for sexual crimes, what I think is most amazing is the knowledge that I was literally standing at the edge of a techtonic plate. I mean, seriously, when was the last time you could say that?

The Almannagja, the rift wall at the edge of the North American plate, is a 2km-long basaltic stretch that you could walk alongside, while gazing over to the Eurasian side opposite.

As the plates are pulling apart, apparently by about 1 cm a year, you could also say that Iceland is a growing island indeed. In between the two plates, sits the rift valley lake, Thingvallavatn, while the river Oxara runs across the national park.

Interestingly, you can also dive in one of the fissures, so if diving “between” two continental plates is on your bucket list, be sure to check out some of the tours that offer this.

After your day out, it’s always nice to head back “home” to the city (I highly recommend Castle House Luxury Apartments) for a lovely dinner.

Read on about my two favourite Icelandic dining experiences at Sushi Samba and Fiskmarkadurinn.