With a city centre that spans across just 2km (1.25mi), most would say a day trip to Bruges would be fine. But to do that, I think, is missing the point. You want to be able to truly enjoy the charming, medieval storybook-like town with its meandering canals, Gothic, Renaissance and Baroque inspired architecture.

Three sights dot the skyline – the Belfry, St Saviour’s Cathedral and Church of Our Lady. The Belfry and its quarterly chiming is the landmark sight and sound in the Markt square. Climb up the 366 stairs (really not that intimidating at all) to get a great view of the town. Built between 1280 and 1350 after the previous building was destroyed by fire, it houses a 6-tonne great bell and a 47-piece carillion.

Tip: time your climb for a noon-time chime session, you can test your ear’s audio capabilities loud and clear then.

Perhaps I was a little “churched-out” by now, I mean so many churches seen in my lifetime of European travels, plus with limited time, we didn’t quite explore the St Saviour’s cathedral, but then again, it was under refurbishment, so guess I had a worthy excuse for skipping this.

Tallest of the three towers is Church of Our Lady – built between 1290 and 1549 and famed for its prized Madonna and Child (1506) by Michaelangelo. There are lovely Flemish paintings lining the walls as well but I would say the church would be a relatively short visit. The Liberty of Bruges Palace stands proud at the Burg – the other “big” square in Bruges which also houses the Basilica of the Holy Blood, so named for preserving a relic of Christ’s blood in a silver and rock crystal vial.

Tip: The last I heard, the vial is displayed to the public only in the afternoons, see the Basilica website for latest updates.

But to me, visiting these landmarks are only fascinating by virtue of the fact that they line the cobblestone streets you would walk around – the best thing to do in Bruges is really to pound those streets.

Only 20,000 people reside in Bruges but at first glance, you might just be shocked by the number of tourists. I mean it was November and the place was swarming when we arrived. Then again, it was a Sunday, so that could account for the hordes of day-trippers. The crowds magically, thankfully, disappeared on Monday. So that said, don’t make the same mistake and plan a 2 night trip on Sunday/Monday.

Tip: We were told Sundays were the days that maintenance works were done on railways, so that means more changes, re-routes and a lengthier traveling time. It took us 4 hours to get to Bruges from Amsterdam, normally it would be around 3 hours.

Another reason to stay away from a Sunday/Monday romp, museums are closed on Mondays. Not to say that I was pining for a museo visit (seeing as how we had come from the land of Museums, see article on Amsterdam Museum Madness), but coming back to Singapore and watching Colin Farrell, in the movie “In Bruges”, walk around the Groeninge museum, staring at Gerard David’s Judgement of Cambyses which depicts a corrupt judge being skinned alive, and having a peek into Flemish Primitives art, made me wish I had made a pit stop at the Groeninge. That said, I did take a walk towards the museum on Sunday, and luckily had about 30 minutes before closing time on the grounds, where we enjoyed the pretty landscaped garden that had statues and even an interesting tree art piece – New Life for a Dead Pear Tree.

If you’re looking for some peace and quiet, there’s no better place to head towards than the beguiling Beguinage – formerly home to the beguines, who are pious women who did not take the full vows of a nun. There are signs everywhere around the pretty courtyard requesting for silence, so you really can enjoy the tranquil stroll to its fullest.

Carry forth that peaceful vibe as you walk on towards the Minnewater, aka the Lake of Love. Take a moment to enjoy the serene sight of swans swimming across the lake and then get trigger-happy with selfie mode on your mobile. If you’ve somehow had the foresight to pack some treats, and by that, I mean some delicious pralines, park yourself on a bench somewhere and just savour it all. 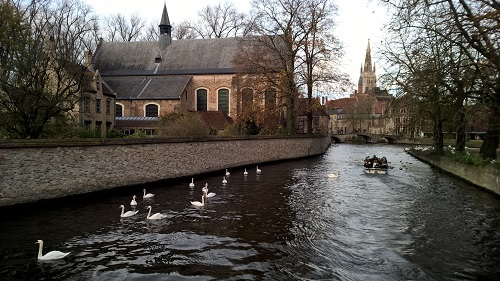 With all that walking around, it’s a good thing almost every 20 steps, you’re going to stumble into a chocolatier or a beer shop. Do yourself a favour and nick into any one of these, any time of the day and spread your calories across the day. No point saving it for a designated “respectable” hour – you eat as much chocolate and drink beer anytime you want in Bruges!

There are so many chocolatiers around that you’d be forgiven for a going a little choco-crazy but I found Depla at Mariastraat to be my favourite. Billing itself as “the oldest artisanal chocolatier of Bruges”, the store prides itself on the master chocolatier, Pol Depla’s creations which I can assure you, somehow taste one notch better than the rest. All this I discovered just by stumbling into many shops and not by reading any guidebooks or reviews online. Only after reaching home in Singapore did I google this, and realize that it’s ranked highly on review sites like Tripadvisor. I think it helped that it was a classy shop with really passionate, friendly staff and no obvious advertising or heaven forbid, anatomically-inspired or cartoon character chocolates around. I stayed far away from any chocolate store that featured such items!

Of course, you don’t have to survive on a diet of beer and chocolate because the other Belgian favourites like moules frites and lamb stew abound. The fries that accompany your mussels are delish but don’t expect them to be complimentary nor free flow everywhere. Same goes for the must-have mayonnaise. As in, you might be charged for mayo, which I guess you have every right to assume should be dripping like ketchup in Bruges. But, nope. As for the beer-braised beef stew – yum! Absolutely get your hands on this dish as you’ll be presented with a steaming hot plate of dark, rich cubes of fork-tender beef that’s just the best especially when it’s a cold, rainy day out. I enjoyed both the mussels and the beef at Beethoven, a quaint restaurant just off the main drag of The Markt square. The resident dog ambles (or should I say, stumbles around – he’s an old guy, give him a break) around looking for treats and he is just so cute as well. Warning: Although the interior does look cosy, don’t expect very warm service. They are competent but it’s probably only your belly (and not your heart) that’s going to feel warm when you walk out of the restaurant. So ultimately, I would say at least one night in Bruges in good, but if you can spare two nights, even better – all the more for you to slowly stroll around, soaking up the charm that is Bruges. And if like me, you believe in the motto below, Bruges is definitely for you!

“There is nothing better in life than chocolate.”