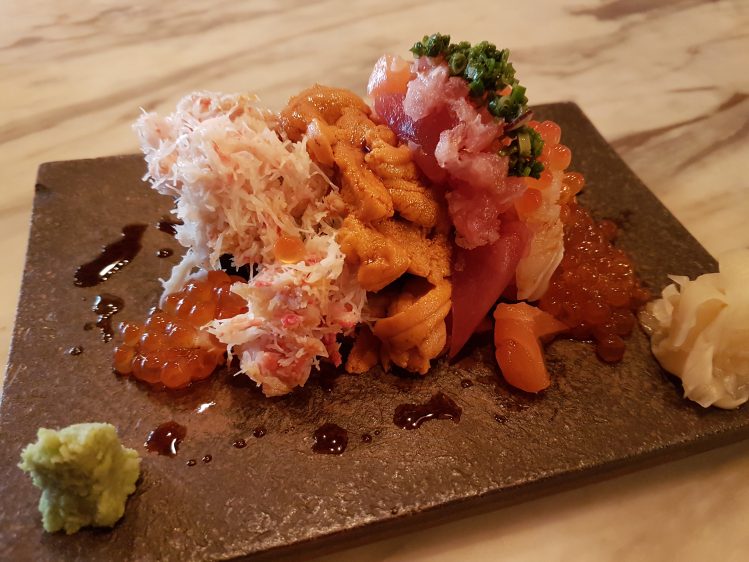 The first time I heard about IZY was 3 years back when it first opened, and I heard about it via a Ferrari-driving businessman. Which explains why it took me over 2 years before I decided to try the place.

That’s only because some izakaya like to pose as casual joints for people out for a rocking, good time, but really, are snooty, somewhat stuffy places where tiny plates and big prices rule. Now, I’m not saying that my first experience a few months back at IZY was like that. In fact, the wait staff are friendly and quite chilled out, frankly. But the prices were on the high side for what is supposed to be a buzzing, izakaya kinda vibe.

I guess the owners have realized that in this time and day, it’s best to move with the Club Street times and they’ve re-launched IZY just a couple of weeks back, with a brand new menu and concept.

Now, they’re focusing on the fun part of being an izakaya, with Japanese-American OTT sushi rolls playing a new part in the menu.

I know it’s sacrilegious but I love American-influenced sushi rolls. The weirder the better! And especially if they are doused with all sorts of flavoured mayo.

So, you can bet I loved the IZY Roll ($16). This has tempura prawn and asparagus, topped with spicy crab mayo and avocado. That yummy crab mayo and the warm, crisp prawn combination was perfect for me! Another sushi like none that I had seen before, and one that really tests your ability to maintain some decorum while stuffing food in your mouth, is the Japanese Nokke Roll ($32).

So it arrives, all piled up with Japan’s best ingredients – uni, ikura, fresh crab and negitoro, and you stare at it, wondering where to start.

Well, if you don’t mind sharing with your partner, it’s the best way to eat! It’s all messy, you can fight about who gets the most uni and it’s altogether awesome!

Now, we were told that the Gyu-katsu ($30) is Japan’s latest craze, so of course, we wanted to try that. If you love rare-ish, uber-fatty wagyu beef, covered in a crisp, katsu coating, then you will love this. It comes served with 3 condiments – wasabi, white radish sauce and soy sauce. Even a non-fatty-meat-eater like myself enjoyed a few slices, since it was cut thin and I suppose anything that is breaded and deep-fried can’t be hard to stomach, right?

But if you’re looking for something healthier, then consider the Bayan Cauda ($15). Frankly, I would never order a bunch of vegetables for dinner, but we were recommended this dish.  It’s that warm sweet white miso with onion, garlic and anchovy sauce that makes it all right! Next we had one of IZY’s Josper-grilled specialties – the Maguro Kama Yaki ($25). As always, with a good Josper oven, you get that nice char which is sweetened by a secret “Asian” sauce.

The last time I was there a few months ago, they had the Sesame Pudding, which is seriously the smoothest and richest sesame puree you will ever have. So, needless to say, I was slightly disappointed that I couldn’t get my sesame fix this time. The pudding isn’t part of the regular menu, it’s just as and when the Chef wants to whip it up, it seems. So this time, we were recommended to try something that, again, I would never bother to order as dessert – Sweet Potato ($15).

As dessert? Hmm. But it turned out to be luscious indeed! Smooth and almost mousse-like, it went perfectly with the accompanying vanilla ice cream.

It seems that Kyoto-trained Chef Masaaki Sakashita, is certainly putting his American culinary stint to good effect, creating some interesting and fun dishes, perfect for an izakaya night out. And with the more affordable pricing, I think I will definitely be heading to IZY more often! And psst…I never realized that IZY houses a “secret” bar. I mean, even other bars that are supposedly “secret” really are not (Operation Dagger, anyone?) so I guess IZY is doing a “great” job hiding their bar? 🙂

We were told that wasn’t their intention, so looks like they will be amping up the hype on promoting CACHE, which as you can guess, would be one of those Japanese bars with the head bartender tending to your drinks with military precision. Something to check out too?

Note: My first visit to IZY was paid for by myself. The second visit was an invite to check out their new menu.