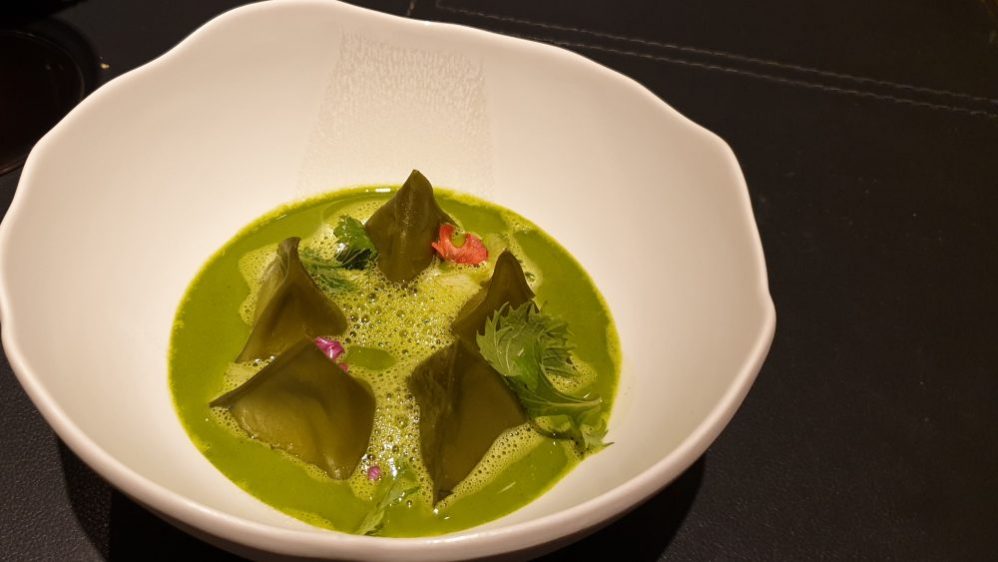 Last year, when I was travelling around Provence, Burgundy and the Rhone region, I nearly visited the “birthplace” of the PIC restaurants – Maison PIC in Valence.

The 3-Michelin-starred restaurant has remained in the Pic family for 3 generations, and has maintained its star status (losing and gaining stars along the way) since 1939 when it 1st garnered 3 stars.

Under the 3rd generation leader, Anne-Sophie Pic, it has kept its 3 star rating since 1970.

However, I went to another 3-Michelin-starred restaurant instead, Paul Bocuse’s Auberge du Pont de Collonges, near Lyon.

I debated hard between the evocatively feminine and gorgeous cuisine of Anne-Sophic Pic versus the traditional and established culinary flair at Paul Bocuse and decided on the latter.

I figured I could get modern twists on French classics at the many esteemed restaurants here in Singapore (Odette, Jaan), but trying the famed Truffled Bresse Chicken cooked in a bladder and the Truffle Soup that was created exclusively when Paul Bocuse was presented with the title of Knight of the Legion of Honour in 1975, was something unique that I had to try while I was in Lyon.

(Interestingly, the restaurant lost a star early this year, creating mini shockwaves across the culinary world as it had held 3 stars for the past 55 years).

But, on to La Dame de Pic in Singapore. When it opened last year, I was certain I wanted to visit one day, and last weekend, I did. It was to celebrate my birthday.

The same feminine, light touches dominate the décor, soothing muted greys and pinks, are all very welcoming. Needless to say, its location at the prestigious Raffles Hotel immediately lends an aura of grandeur to the restaurant, but nothing that reeks of stuffiness or tradition.

While sitting at the pastel-coated booth seats that centre the restaurant might appear to be the more enticing option, I prefer the seats by the full-length windows that give you a view of the courtyard. And the seats also seem more private.

Birthday ritual calls for champagne, and we were happy to see one of our favourite producers on the list – Billecart Salmon ($38 per glass).

As for the menu, we selected the $238 6-course Experience menu over the $328 7-course Elegance menu, as we were reminiscing about the amazing cheese service we had had in France last year, and we wanted to ensure enough capacity to add on the cheese course (additional $38) at La Dame de Pic.

Four snacks are presented, each elevating in flavour intensity. I especially enjoyed the little yuzu balls.

Sea Urchin from Hokkaido – haven’t seen an uni dish this pretty. Also, the fresh herbaceous scent of dill was a lovely match with the sweet uni and custard.

Then came chef Pic’s signature dish, the Berlingots – matcha pasta parcels filled with light-as-air cheese fondue. Charmingly the waiter gave Singapore credit saying that chef was inspired by our local childhood game of “5 stones”, but we all know that’s not true. 😊

(The berlingots are inspired by a traditional hard candy from France).

The fennel and absinthe tinged broth comes all vividly green and fresh to give the berlingots a boost.

Speaking of broths, the Turbot from Brittany comes with a mushroom broth infused with oolong tea that is so rich in flavour that it reminds me of chicken essence, a flavour I really love.

The fish is firm with white asparagus shards that have been roasted in ponzu. Again, seemingly light, yet robust in flavour.

For the mains, I chose the Saga Wagyu and it was my dish of the night. Having been marinated with sake, Kampot pepper and cacao nibs, the beef itself was amazing, but the fact that I could slice through it like butter made it all the more perfect.

My hubby had the Bresse pigeon, which had been roasted till perfectly pink, and again, the ingredients list featured many unique Japanese-influenced spices, creating a dish that he thoroughly enjoyed.

Skipping the cheese, straight to dessert

By this time, we were too full to fulfil our cheese cart desires, so we skipped that and went straight to dessert.

That was just as well because the pre-dessert, interestingly, was not something citrusy or light, but rather a Brie de Meaux Cheese with vanilla – a sort of pudding to lead us to dessert.

I didn’t have to think twice of course, my choice was always going to be the Kalingo Chocolate and Chestnut. It came with a oak wood rum ice cream, I devoured everything in a flash.

The Mango Exotic that my husband had was a light affair, nothing to rave home about, according to him, but I suppose it was just the right ending to the meal. Very representative and anyway, we were suitably satiated by then.

A little birthday treat came in the form of this chocolate delight, which they kindly offered to pack up for me. I enjoyed it for tea the next day!

A note on the wine list. Relatively compact, there is a focus on wines from the Rhone (only natural seeing as this is their neck of the woods) but we selected a Burgundy (Domaine Faiveley Mercurey 1er Cru Clos des Myglands) to go with our degustation.

I would 100% recommend dining at La Dame de Pic, especially for special occasions. The ambience is lovely, food hits just the right mark in not being too subtle, nor too intense, and service is pleasantly warm.

Closed on Sunday and Monday