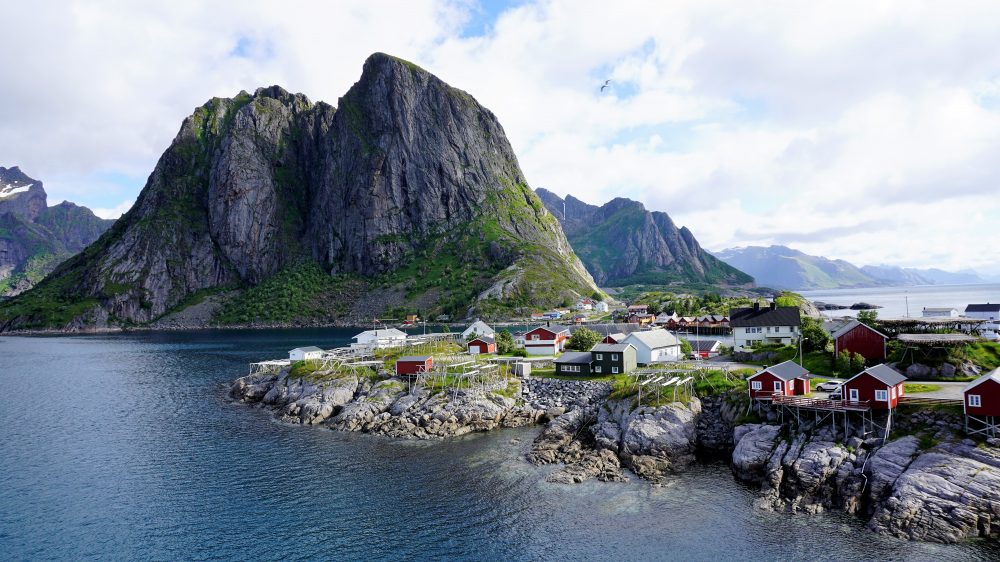 Once upon a time, I took a plane and a boat to a far off land in the Arctic. It’s a magical place of red fishermen’s cabins on stilts surrounded by mountain ranges with jagged shark teeth edges. Sights and smells of dead cod fish hung out to dry compete with rows of the prettiest wildflowers anyone has ever seen. The sun refuses to sleep in summer and therefore, so did I. Welcome to The Lofoten islands.

Sherlock Holmes would be pretty peeved if you didn’t deduce the importance of cod fishing to the inhabitants of the Lofoten.

That dry, salted fish smell clings to the air, bringing back memories of a time when my family used to leave fresh fish to dry in the hot, sunny climate of Singapore. The resulting fish (also called karuvadu) was then used with spicy sambal paste as a condiment to our meals or added in curries.

In Norway, the dried fish, known primarily as stockfish, is often reconstituted with a broth and served quite simply, usually accompanied by just potatoes.

Every year, during late January to April, schools of cod swim up from the Barents Sea to spawn in the relatively warmer waters (5°C) of the Lofoten. And this is boom time for Lofoten fishermen who catch, gut and hang the fish out to dry, not only for sustenance during the cooler months but also because this is Lofoten’s big export to the world – most would be familiar with stockfish in its form as bacalao served in Portuguese/Spanish restaurants.

The imposing Lofotenveggen (Lofoten Wall) greets you as you approach via ferry – at one glance appearing to be a singular sinister mountain range rising precipitously from the sea.

You wonder if the impasse could be broken and how people actually build communities in this environment. But enter the forbidding gates of the Lofoten and you will soon realize that a clever series of curved bridges weave through the 6 islands like a silk ribbon, enabling motor vehicles as an alternative transport to boats. Also, white sandy beaches aren’t just the purview of tropical islands. The Lofoten boasts its fair share, and on a good night in summer, vermillion views of the midnight sun are best seen from the beaches at Ramberg. 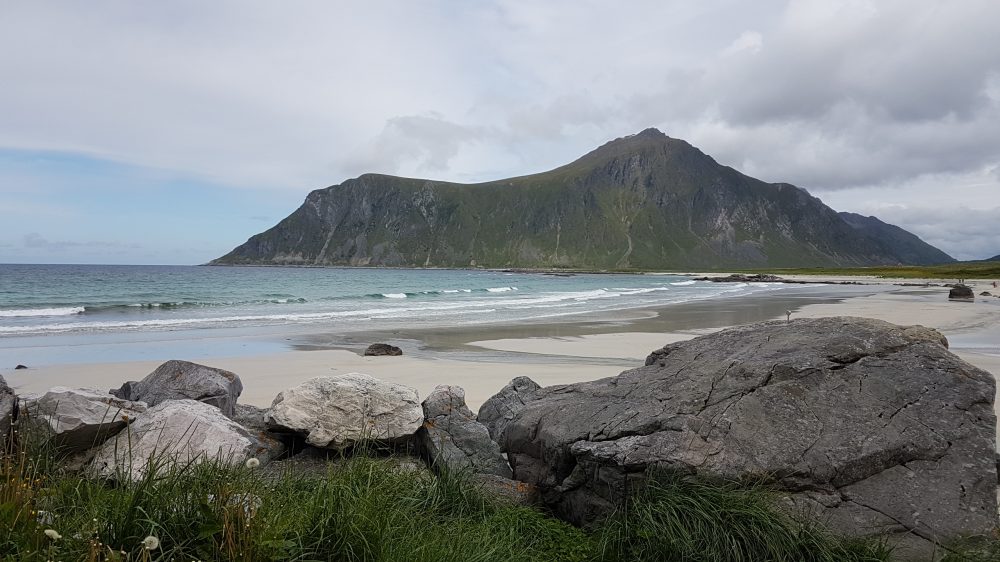 They might be the raison d’etre for tourists visiting the Lofoten, but in days of yore, these sparsely furnished cabins were a haven for fishermen who previously had no other choice but to sleep underneath their overturned fishing boats.

Dating back to the 12th century, these shacks are unique to the Lofoten, painted red (one might wonder if that was to symbolise the blood of all the cod fish) and built partly over the water. These days, staying at a rorbu in Lofoten has become so popular, bookings have to be made months in advance, and in some cases, itineraries might just have to be turned topsy-turvy to accommodate a stay.

That’s what we had to do – reverse our itinerary just so that we could stay at Eliassen Rorbuer. So instead of flying in to Oslo and resting there for a couple of days before heading up northwards, we had a long distance from Singapore to Oslo, then a 2-hour flight from Oslo to Bodo, a 3 hour wait for the ferry to Moskenes, which was a 4-hour sail across! Needless to say, that was a tiring travel day.

Still, the moment we got off the ferry and were greeted by the view below, we suddenly forgot the long journey we had endured. I will admit to an unhealthy obsession with the Arctic. The desolate, wide, cold spaces during winter, the never-ending sunlight where life really comes to life in the summer, such extremes enchant me.

Being the 1st stop on my Norwegian adventure, the first thing I noticed was the wildflowers. Pretty dainty morsels growing out of any possible arena is a metaphor for mankind’s will to survive, I think, as I admire the purples, blues, oranges and reds.

In the Arctic, and wildflowers are the 1st thing I remember? Seems unlikely, but it is indeed.

There’s also all the fauna I got real up close and personal with – including sheep that one normally sees far off in the mountains; I chanced upon many a grazer while hiking in Lofoten. 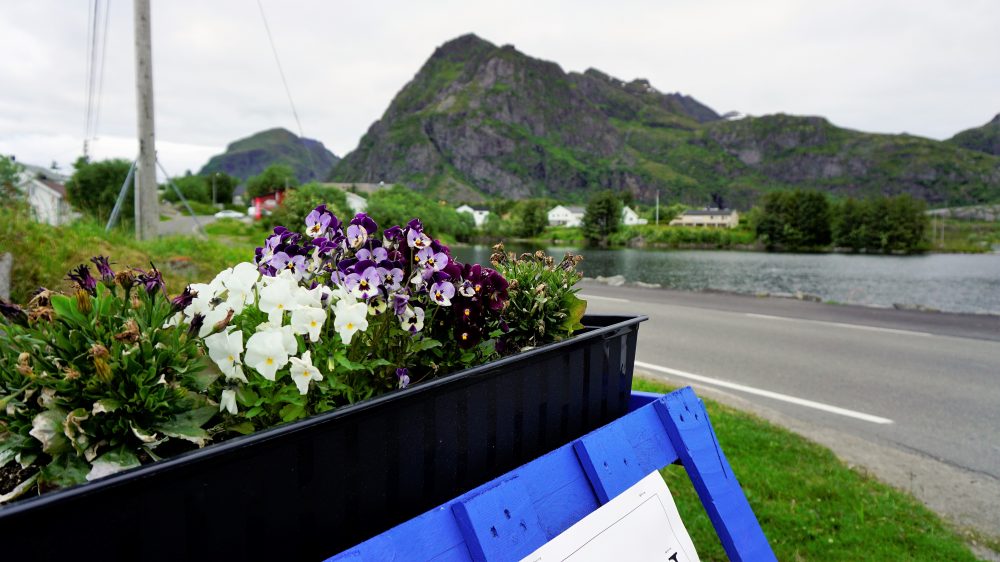 After the Lofoten islands, we went round the west coast of Norway, including Bergen, Alesund, Flam and Stavanger. Still, the Lofoten remain firmly in my heart as a highlight of my Norwegian holiday!

Practical Information for The Lofotens:

How to get to The Lofotens:

While there are many options depending on where you are coming from, the two below are popular.

It may not be the most efficient way but it certainly is the most dramatic. As the 4-hour ride from Bodo leads you to Moskenes, the Lofotenveggen (Lofoten Wall) greets you, a majestic mountain range jutting out from the sea, especially dramatic on a gloomy evening.

Fly to Bodo from any major airport in Norway, and take the Moskenes-bound (car) ferry. Note that the ferry also calls into two other islets – Vaeroy and Rost, farther south from Moskenes.

If you have rented a car at Bodo, it is best to make a reservation for the car ferry. Otherwise, reservations are not needed for just passengers.

Ferry from Bodo to Moskenes

You can also reach The Lofoten by direct flight to either Leknes or Svolvaer from any major airport in Norway.

While you can do so with Avis and others, we found the cheapest option to be Rent-a-car Moskenes. We paid S$420 (US$311) for 4 days, where with the others, we noted the price hovering around S$300/day! The catch is, renting from Rent-a-car Moskenes is an option only if you arrive at Moskenes. So if you fly in to Svolvaer or Leknes, this would not be an option for you.

Having a car is essential I believe. That’s the best way to get around the islands on your own which gives you flexibility. Very important in the summer months for those midnight drives! 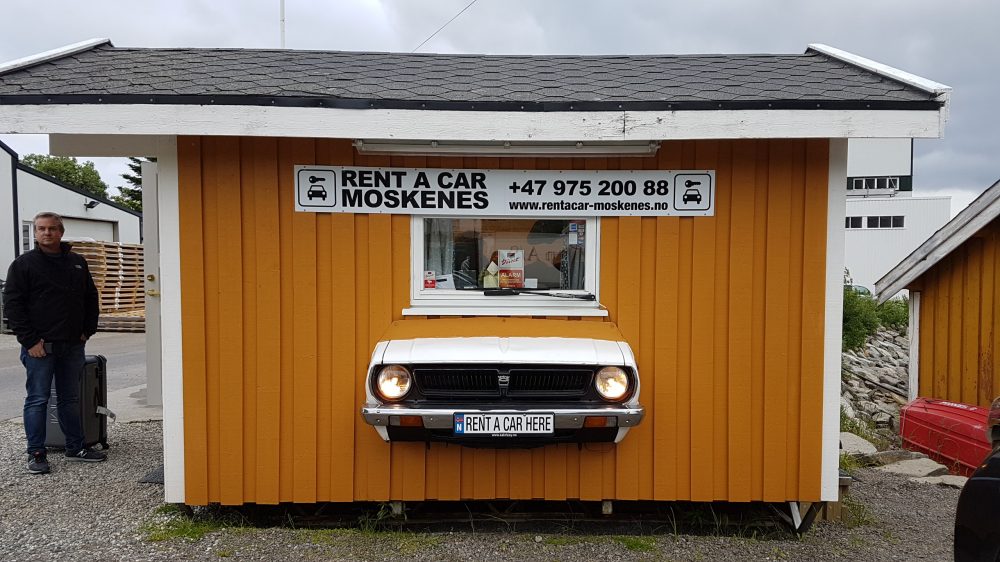 We stayed at the Eliassen Rorbuer, and it was an excellent decision, seeing its proximity to the Moskenes port, and also the pretty villages of Reine, Å and Flakstad. Despite relatively crampy bedrooms, the cabins were big with separate dining, sitting and kitchen areas. If you’re arriving late at night, best to have something with you for supper as places don’t open late.

If your room doesn’t include brekkie, you can either head off to the co-ops to buy groceries or be lazy like us and go for a buffet breakfast.

Gammelbua at Reine – we’re talking mostly cold cuts, cereals, bread and cheese but at least they have more variety for each and very important extras like Nutella!

Anita’s Sjomat at Reine – a great place for a takeaway fish soup or sandwiches – especially neat if you’re hiking or exploring the rest of the Lofotens.

Bringen Kaffebar at Reine – lovely place for a breather and a cuppa with delicious cakes and pastries.

Smaken at Å – Å is located further south of the Moskenoya island, and is worth a visit to fully get a feel of a small fishing village. We saw fishermen in action, scaling and gutting freshly caught fish while the neighbourhood cat eagerly awaited treats. We had our own treats of fish soup and stockfish (requisite must-tries at Lofoten) here.

Krambua at Hamnoy – this restaurant at Eliassen Rorbuer has upstairs seatings, pick a seat by the window and enjoy homecooked fare by the family-run kitchen.

Fiskekrogen at Henningsvaer – looking like it wouldn’t be out of place in a cosmopolitan setting like Sydney’s harbour, this restaurant and its bar serves up gorgeous fish and cocktails.

Café Lysstoperi at Henningsvaer – teeming with tourists and locals, this cosy place is perfect for simple lunches of sandwiches and awesome pastries.

Maren Anna at Sorvagen – my favourite of the lot. Here you can really tell the difference between simply presenting a fresh piece of fish versus adding fine touches that will raise the dish up. That was one of my main issues with the level of cooking at Lofoten – I noticed a tendency to overcook the gorgeous fish and lamb they had. Not so at Maren Anna.