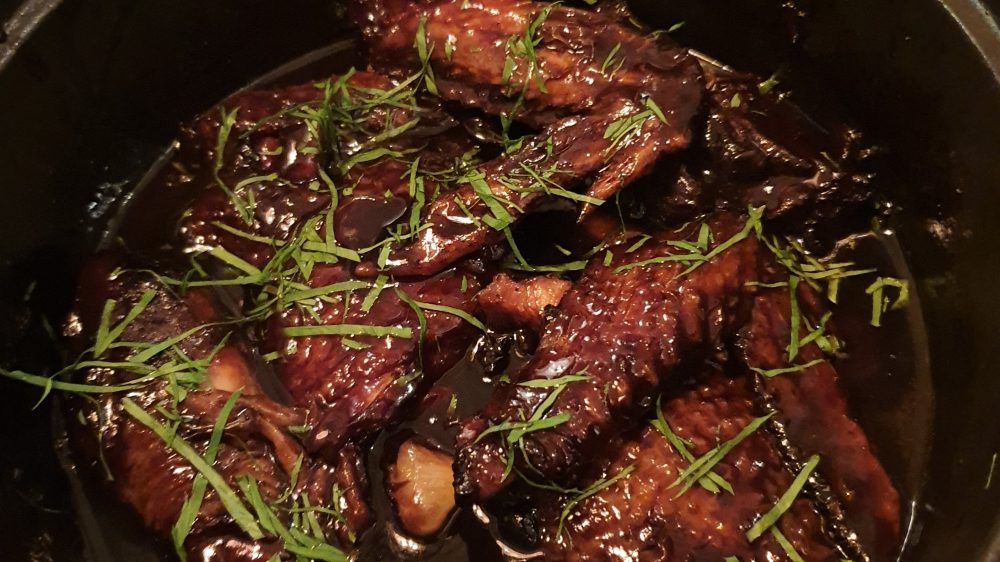 Just how much can a pigeon tell you about a restaurant? In the case of Ma Cuisine, quite a lot, it would seem.

That one dish alone sums up the differences between the two Ma Cuisines in the world – in Singapore and Beaune, Burgundy.

I was planning to write a story of a father and son, of a Beaune legacy being transported to Singapore but I realise that’s not quite possible.

A Tale of Two Ma Cuisines.

I visited Ma Cuisine in Singapore last year when they first opened, and was impressed by their super selection of Burgundies.

Naturally, I had to visit the birthplace itself when I was in Burgundy this July. Ma Cuisine in Burgundy is the pit stop for every true-blue Burgundy fan and is much-lauded for its impressive cellar and its country-style, typical Burgundian fare.

Walk in on any given night and you’re bound to be turned away if you hadn’t made bookings, that’s how well it has been holding court.

The owner (and father), Pierre Escofffier, runs the show – you’re not allowed to order from anyone else but him. The young lady assisting him brings you water and bread, but anything more, you’ll have to wait for Pierre to come along.

He maintains his warmth despite having to run around in what feels like a tavern filled with flash wine-loving patrons.

The menu is scrawled on a chalkboard and it’s as typically Burgundian as it can get. From the escargot to jambon persillé to oeufs meurette to boeuf bourguignon to époisses – you come to Ma Cuisine in Beaune and it’s a roll call of Burgundy classics.

A reasonably-priced set menu for 28€ was available but there was no way either of us was planning to choose it when the à la carte featured gems such as the ris de veau and a pigeon entier.

And now, about that sagely pigeon.

The one dish that exemplifies the differences between the two Ma Cuisines.

In Ma Cuisine Beaune, you get a chop shop version of the entire pigeon, sticky, sweet with an unctuous red wine jus. It’s lip-smackingly good and using your hands is a must.

Though the menu description was clear and gave no false pretentions towards an entire pigeon, I think the memory of that hearty pigeon (can a pigeon really be hearty, though?) from Beaune was so entrenched in my mind, that I was just a tad bit disappointed to see the elegant, fine rolls of pigeon and foie gras wrapped in savoy cabbage and bacon that appeared before me.

Not that it was not good, it was delicious. That same quality jus was there. It’s just I who can’t get over the “homelier” version in Beaune!

And that pretty much speaks towards the experience at the one Michelin-starred Ma Cuisine in Singapore. No boisterous imbibers drinking the night away, a menu by Mathieu Escoffier that is more refined and perhaps, fitting of its Michelin status, and an atmosphere that is rather serene.

Another example of the traditional versus the modern can be seen with the two escargot based dishes we tried that night.

And I’ll have a calf’s head with that, please.

For mains, we decided to be a little adventurous and try the Tête de Veau – I’m guessing the wait staff might be tired of patrons asking if a whole veal’s head was going to appear before them?

My husband described this dish, of which I took one teeny bite, as being gelatinous all the way. Perhaps too monotonous for his liking.

I know the Coq Au Vin fared really well across the table. I have honestly never had such a rich, decadent Coq Au Vin before. The jus was intense, so heady and rib-sticking.

As for the wines, suffice to say, the wine list is extensive, a great selection across not just Burgundy but the rest of France too, at both restaurants. I don’t even need to comment on this, if you dine at Ma Cuisine, you will have zero problems finding something to fit your tastes.

That said, the choice by the glass is the most limited I have ever faced – just the one red or white. This was in Ma Cuisine Singapore, I’m not sure about Beaune. It’s almost as though they are saying, “who are you kidding, you’re only just going to have one glass??”.

But that just means more excuses to go with friends and try one of the fabulous labels they carry.

So, Ma Cuisine Beaune or Singapore – which is better?

Well at the risk of sounding like I don’t want to offend father or son (which you know isn’t a factor for me), my honest answer would be ça dépend.

More refined atmosphere, a different interpretation of classics – Ma Cuisine Singapore has got that down pat. Bustling, rustic, hearty – well, that means a plane ticket to Burgundy. You pick.