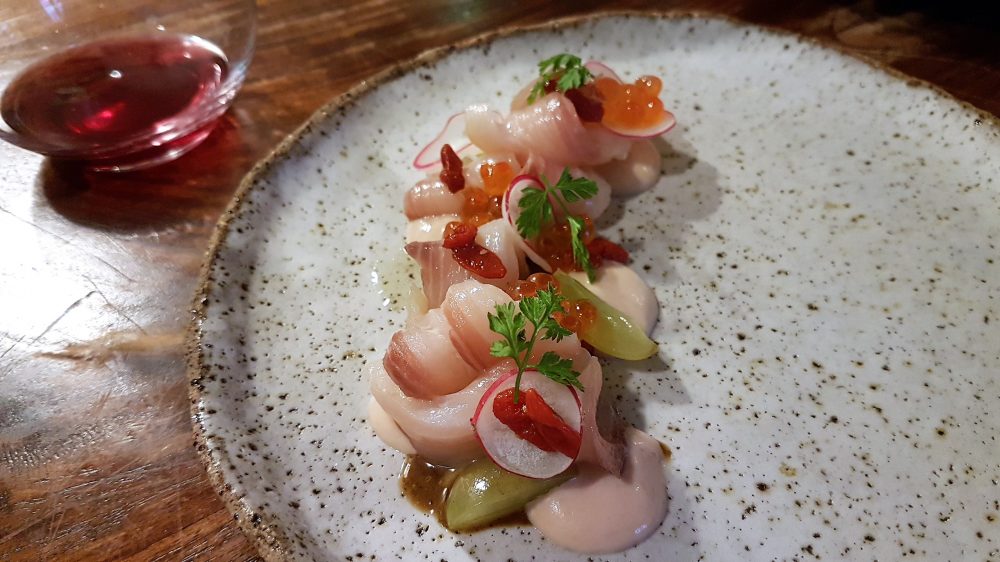 Morsels. With a name like that, I had never been tempted to visit Morsels when they were at Mayo Street, also because of friends saying it’s overpriced for teeny portions.

Recently though, another food-loving friend raved about the place, so I decided to finally check it out at its new digs at Dempsey.

Pushing aside all pre-conceived notions, I walked into the “hidden” and homey (more on the décor later) restaurant located behind Long Beach. Basically, walk up the stairs as if you’re going to Samy’s and Long Beach, then walk past Long Beach, turn left into a small car park and the tiny building awaits.

It’s a charming place all right. All eclectic and rustic, especially with the various quirky lamps hanging around – think cheese graters, glass bottles and twigs for lights. As hubby settled in with a beer, I perused the menu – actually, I’m lying, I had already studied the menu online before arriving and trying my darndest not to pre-judge, I placed our order.

“Just to inform you, our dishes are quite small, so I’d recommend ordering about 5 dishes to share, if you’re feeling hungry,” suggested the lovely waitress in response to our initial order of 3 dishes.

We’re talking dishes that hover around the $28 region on average, so… do the math.

Anyway, I was starving, so I went ahead to order 4 dishes instead.

First up, the Kasu-Cured Hiramasa Kingfish ($22). As evinced throughout the meal, the dish was plated to perfection. Bright orange ikura baubles and vermillion wolf berries brightened up the shiny slivers of cured fish, together with the green of the pickled grape and parsley – which appeared to have been placed with military precision.

Flavour-wise, the kasu (lees leftover from sake fermentation) curing process added a fresh, fruity element to the kingfish, balanced with the sourish tang from the pickled grapes and radish. The mild rhubarb aioli rounded off the dish well by adding creaminess.

Next, the Burnt Somen (S$18) with mushroom dashi, pickled woodear, sugar snap peas and charred corn. There’s not much to rave about for this dish, it wasn’t bad, just nothing really stood out for this dish. The Grilled Octopus Risotto ($28) – well, the good thing is, it adds to your carb count, helping to fill you up. Unlike the paella version of the squid-ink rice, the risotto should be creamier and all the more unctuous. Sadly, this wasn’t. The seafood flavour was barely discernable and the accompanying salted egg sauce was strangely grainy. At least the morsels of octopus were well-cooked, what little there was of it. If you want more octopus, you can pay another $6 for that.

We didn’t get extra octopus but we did pay for a bigger portion of the Ume Braised Beef Short Ribs ($38). We figured at the rate we were going, we should, lest we ended up binging on fish head curry and chicken masala at Samy’s next door post-dinner. Now this dish was delicious. Rich, robust, tender – the accompanying jus, Okinawan sweet potato and wasabi added even more oomph to the dish.

Although we weren’t full, none of the desserts interested us, and also, judging by how the meal had progressed, we decided our best choice was to skip dessert.

If the flavours had been astounding, I would not have thought twice about the price we paid, but because nothing was memorable, Morsels didn’t meet my perceived value for money aspect.

On the plus side, Morsels has a lovely charm and ambience and small touches like complimentary tasting portions of paired wines for some of the dishes are appreciated.

I also applaud the team at Morsels for experimenting with the creative fusion of flavours but with so many other innovative restaurants rocking the scene in Singapore, you’re better off checking other places like Salted & Hung.