Oh Po-leez, do you really think you can get away with charging those prices?

Or maybe I should ask, do you really think you should get away with charging those prices?

At Po, located in the new boutique hotel, The Warehouse Hotel, we’re talking S$28 for 4 wrap-it-yourself rolls of popiah and $32 for atas (high-end) hokkien prawn mee. You get the drift.

Yes, for some of the dishes, the premium ingredients used in them warrant an increase in price – but to that extent? No.

Here’s the rationale. Carabinero prawns – so sweet, so decadent, so special. Definitely not the scrawny shrimp you see being served at some hokkien prawn mee stalls. 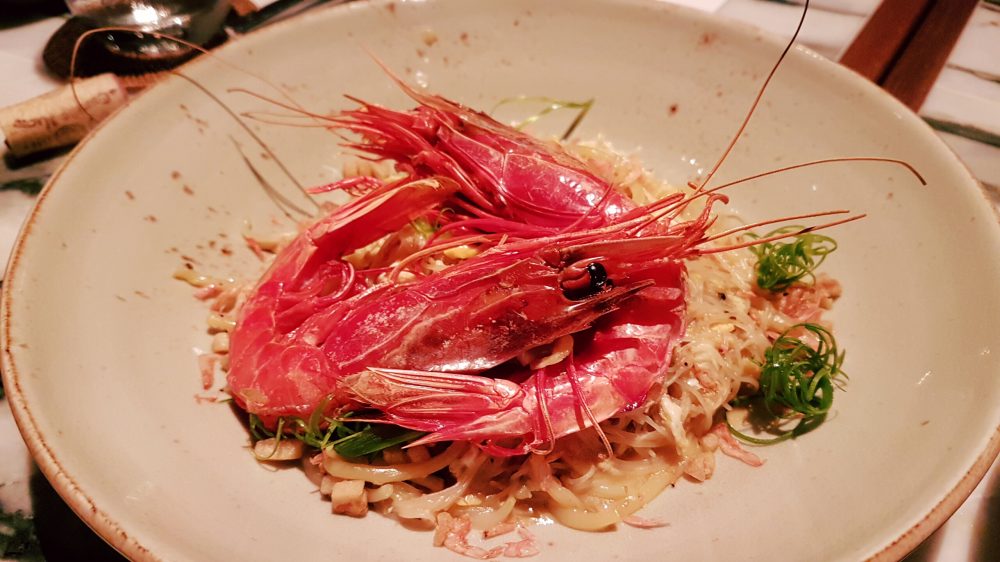 But those 2 scarlet sweeties on my plate – do they really warrant an almost 200% increase in the price of my hokkien mee?

I am comparing equivalent portion sizes of hokkien prawn mee that you get at some of the best local stalls in Singapore.

Lest you chide me for being a bumbling peasant, yes, I recognise that this is in a glamorous hotel, filled with an uber-chic crowd (come to think of it, I think I only saw the hip set at the bar, not in the restaurant, maybe that’s saying something?) and it has the supposed “poster boy” of Mod-Sin cuisine Willin Low’s name splashed all over it but here’s the thing.

If what you are serving is only just as good, or not even as good as what I can get outside for a fraction of the price, why, oh why would I return?

But enough flogging the price horse, let’s get on with the tastes.

We skipped ordering the popiah – which has its own placard adorably copywritten to make you feel as though you would be committing a sin if you didn’t order it – and chose the kueh pie tee ($16) instead. 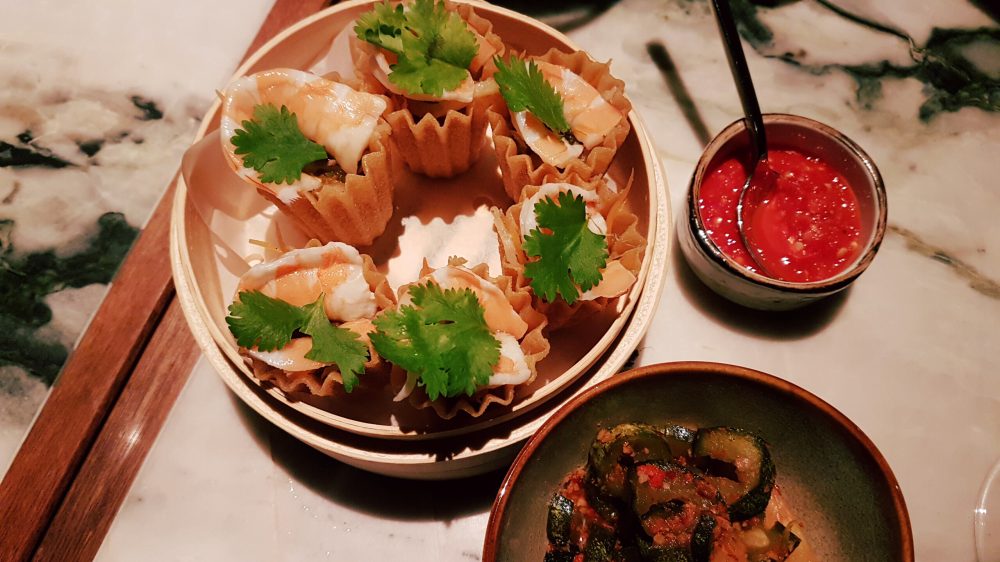 Then, one of the highlights of the night – and I only say this because it’s not going to be so easy finding Iberico Pork Satay at your regular satay stall, so I guess the $20 for 3 sticks price isn’t as heinous as the popiah price – came along. All smoky, charred and plump, they were gorgeous on their own – you barely needed the grated pineapple/peanut sauce that accompanied it. That said, there were 4 of us, so instead of allowing us to order one more stick, we had to order 2 portions which, frankly, because the satay was good, we didn’t mind. But I can see how some people might be peeved by the lack of flexibility.

Next, a melting hunk of Veal Cheek Rendang ($35). Again, rich and redolent of spices, this dish was gobbled up by all. Some of whom were wishing they had a little bit of rice to enjoy the gravy with, I’m sure. Interestingly, after we had ordered the Carabinero Prawns and Konbu Mee, which was described as a “dry umami spin on a local classic”, my hubby said that he had a feeling it was going to be hokkien prawn mee.

And it was. Exactly the same. Except for those mighty carabinero prawns, of course. Luckily, the prawn stock taste was very evident in the soft, slippery noodles and yes, it really was full of flavour. 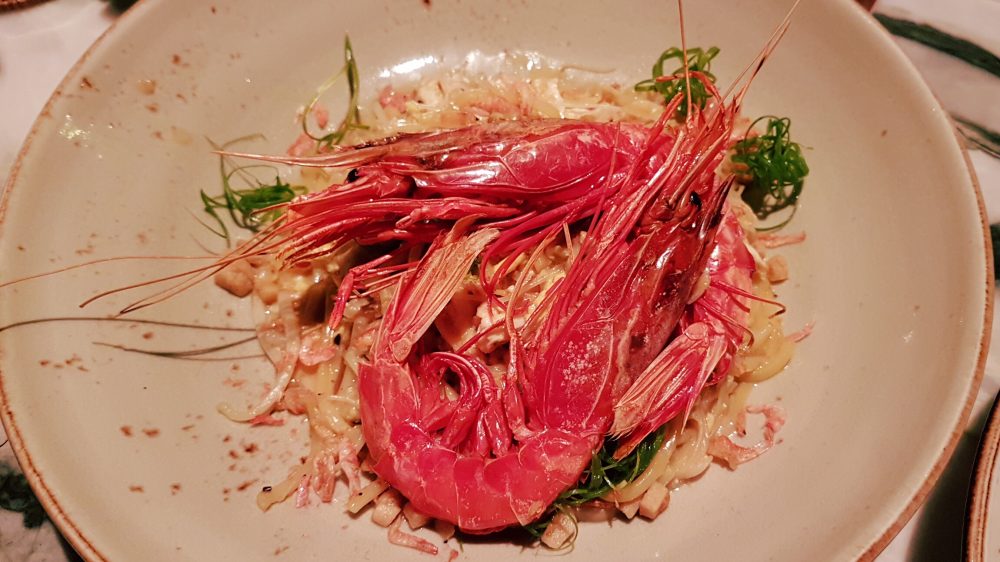 Then, the grand finale of the mains – the Paper Spring Chicken ($49). Majestically carted over (gueridon-style) on a trolley, the waiter opens the parchment paper parcel to reveal a plump bird. Stuffed with conpoy, Chinese sausage and mushroom-filled glutinous rice, the bird was succulent, and having been marinated in sesame oil and shaoshing wine, it was savoury indeed. 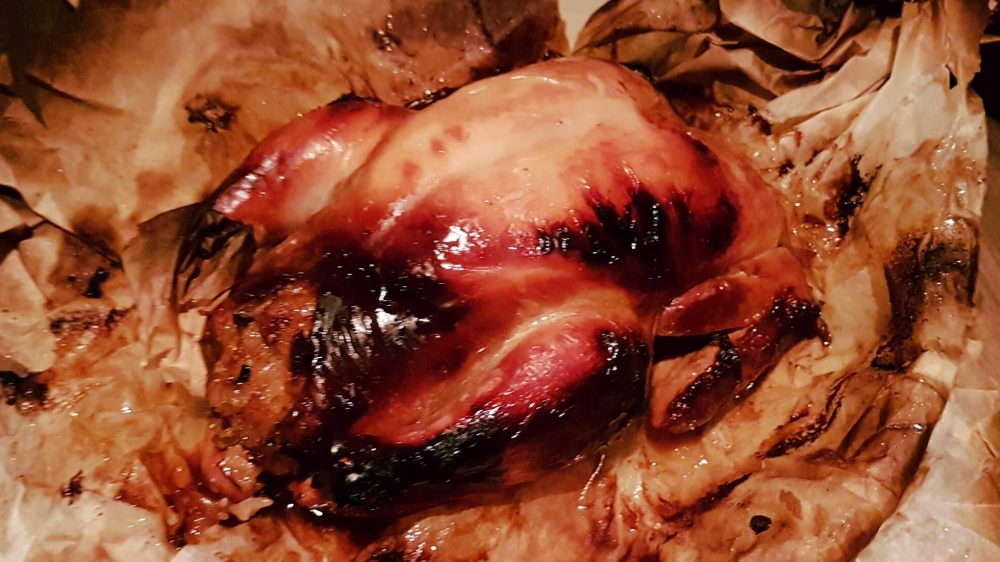 This is enough for 3 people or 4, if you’ve ordered as many of the previous items as I had.

For dessert, we shared the Goreng Pisang ($12). Banana balls, encrusted with puffed rice, laced with a smidgen of gula melaka (more of this sugary syrup would have been appreciated) and a light coconut gelato. Not terrible, but everyone thought they could have used sweeter bananas. In short, Po is probably going to be appreciated more by tourists or people in Singapore who may not know much about the prices or quality of the real stuff out there and who don’t mind spending much more to enjoy a classier ambience.

As for me, Po is the kind of place I would only return to if I had to host business visitors from overseas who might not have the time nor inclination to explore Singapore’s fabulous hawker fare.

On a another note – I’d be remiss if I didn’t expand on the fabulous bar at The Warehouse Hotel. There’s a fascinating range of Asian-elements-infused cocktails available: try the hibiscus gin-based Barberella ($21), she’s got a killer kick; and for a creamy, familiar kaya-flavoured drink, go for the Kaya Lumpur ($19) with pineapple rum and basil. 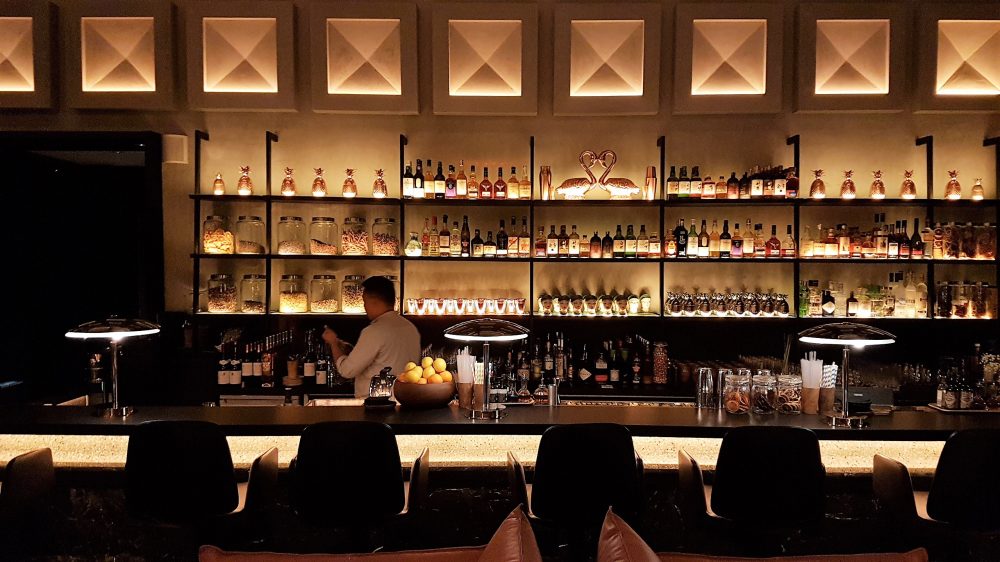 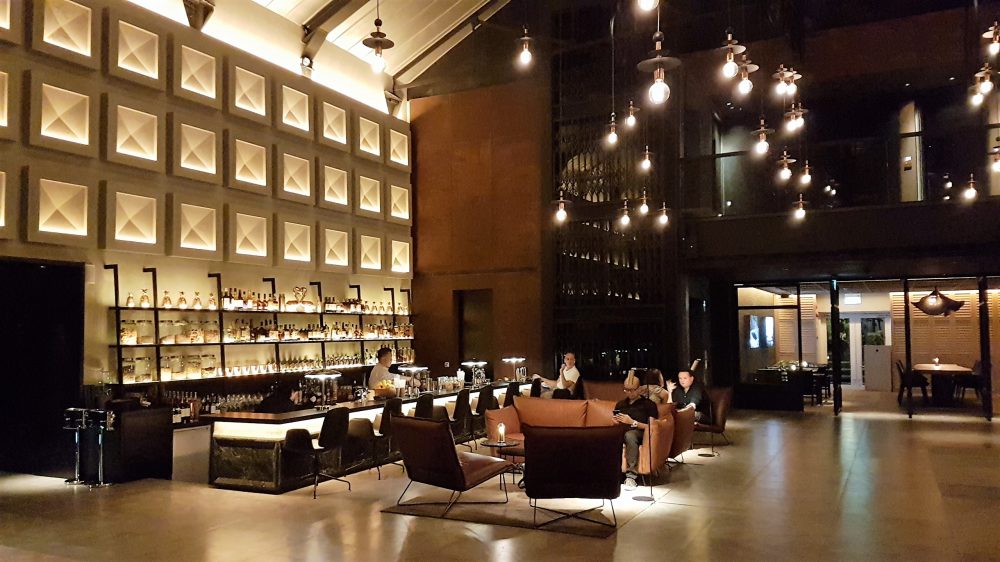 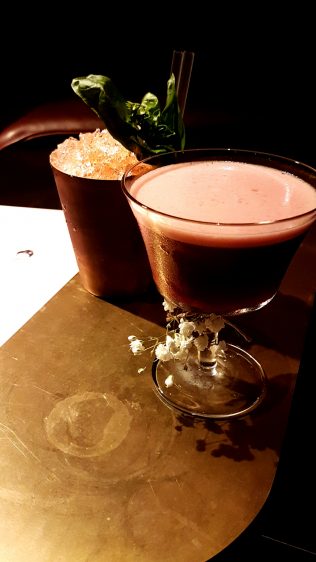 One thought on “PO restaurant – possibly grandma-approved but she might just baulk at the prices!”