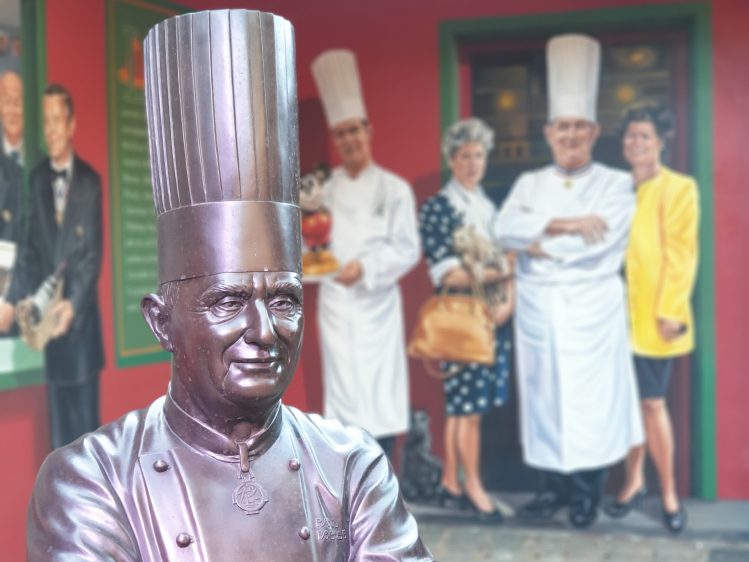 Paul Bocuse. Any gastronome would be familiar with this name, albeit in varying degrees and favour.

There are those who regard him with much reverence for showcasing the culinary prowess of France, and there are those to whom he was just another French chef with an unhealthy obsession for les regles de la cuisine Francaise.

That is, there is the perfect way to execute something, and that’s it. The Rules.

After all, Bocuse himself described his cuisine as classic French with “butter, cream and wine”.

Seeing as how I veer towards the unexplored, the uninitiated and the unthinkable (I’m talking about food, guys), visiting Restaurant Paul Bocuse on my recent trip to France wasn’t something I was planning to do.

Why would I want to spend nearly a thousand dollars on classical French when I can get the same at other good restaurants that aren’t necessarily Michelin-starred? This is France, if I did my research right, surely I can find places serving top-notch magret de canard or fricassee de volaille aux morilles, right?

Well, yes sure. So, I decided to focus on restaurants that are known for exercising creativity in their modern interpretations of French cuisine.

That is, until 1 week before I was to fly off to France. I had watched a YouTube video posted by a couple who had successfully captured the glorious indulgence of dining at Restaurant Paul Bocuse. Watching the much-vaulted Bresse chicken cooked in a bladder appear, and then punctured and served table side was a revelation. It was as if a brainwave hit me.

How could I not eat that chicken from Paul Bocuse?

Why would I not want to eat such a famed French dish at one of the best restaurants in France? Where else would I be able to find such a dish? Yes, this dish was not completely invented by Paul Bocuse, instead it’s an adaptation of the one by La Mere Brazier, whose restaurant he had worked at as a young chef. But still.

And what about the Truffle Soup, the one laced with shavings of black truffle and foie gras that was created in honour of France’s president in 1975? That surely sounded like something special.

Not to mention, the way the lady in the video was oohing and aahing over the cheese and the desserts.

Eating innovative and modern cuisine, that I can have anywhere. There are so many restaurants in Singapore itself that do this style of cuisine proud.

And so, the decision was made to go back to the classics and pay a visit to Restaurant Paul Bocuse.

Located about 20 minutes’ drive from the centre of Lyon, the brightly coloured building is the first thing you will see. The official website echoes my sentiments exactly, calling the style “overbearing and outrageous”, although I’m sure they do not mean it in the same way I do.

Proud representations of Bocuse is everywhere, and I mean EVERYWHERE. The courtyard already tells you his story, and you’ll see the brand on everything from the doorknob to the cutlery.

It’s all kitschy to me but I’m here for the food. And the service, of course, after all, this is a restaurant that has held its 3 Michelin stars since 1965. {Update: They lost the 3rd star in 2020}

Champagne in hand, we started on the snacks while we awaited the menu proper. We had selected the priciest option at 280€ each because it had the truffle soup and the Bresse chicken in a bladder. There are 2 other options available at 175€ and 235€.

First course arrives, and I can still visualise the massive chunks of sweet Lobster and the mound of caviar that sat atop it. Plus the clean taste of the iced Pouilly-Fuissé court bouillon with lemongrass. Oh, a brilliant start to the night. I have never been plied with so much lobster and caviar in a starter.

Next, the famed Truffle Soup. It took a while to “get used” to the flavours. Essentially tasting like an intense chicken and beef consommé, the addition of the truffle and the foie gras initially seemed like “whoa, there’s just so much happening flavour-wise, I’m not sure they are all getting along”.

But as I kept on sipping, the extremely generous shavings of truffle continued to add so much depth and perfume to the dish, and the foie gras, the meatiness. Excellent dish.

I can’t not comment about the perfect pastry topping either. It stayed fluffy and crisp. I still regret not finishing every bit of pastry, just because I was too afraid I might become too full for the rest of the meal. Stupid me. You’ll see soon enough why I shouldn’t have “wasted” my savoury dishes.

Next, a fillet of Sole from Normandie with citrus fruits “viennoise”. The sauce was perfect. Despite the potential cheesy creaminess, it remained light thanks to the touch of citrus and of course, the fish was good too.

We had a little palate cleanser after – the Beaujolais winemaker’s sherbet. I think this is the first time I had tasted a sherbet that really tasted of wine.

What we came for… the Chicken in a Bladder

And then… the main event. The Bresse Chicken in a Bladder. For a dish as momentous as this, the waiters sure seemed in a rush to burst my bubble. As in, to prick and deflate the bladder. There went my Instagram moment.

But anyway, as the bubble burst, the aromas of the truffle-perfumed chicken started to waft and we watched intently as two waiters went straight to work on carving and plating the dish.

Was it all that? Well, yes, I think so. The chicken was cooked to perfection but the hero has got to be that morel cream sauce. Again, you will find no shortage of ingredients on your plate, there was so much lovely meaty morel! And again, we were so careful not to overeat that we wasted some of the chicken and in my hubby’s case, quite a bit of the morel sauce. What a shame.

Just as a side note, the pacing was good. Not too much in a rush, nor any painful long waits.

But how was the cheese and dessert service?

The cheese cart is then rolled over, featuring, I don’t know, maybe 20 types of cheese? For some reason, this is where I think they could have been more attentive with their service. We were just asked what we wanted. It would have been better if they had asked us with some “parameters” in mind, that is, whether we liked goat’s, cow’s, sheep’s, soft, hard, blue, local, regional etc. This is what happened at Restaurant Stéphane Debord in Dijon and I really appreciated the custom-made platter.

This might not sound significant but I believe that when most people are presented with so many options, they tend to just go with what they are already familiar with. Because you wouldn’t want to keep asking the waiters to repeat themselves, especially when it’s usually a blur of French names being muttered at fast speeds.

So you pick blind or stick to what you know. Which is a shame.

Once again, despite the fact that we didn’t choose all that many cheeses, we wasted quite a fair bit.

All for dessert. See, we were intimidated by the YouTube video of the buffet-like dessert options, and we couldn’t wait to try two of the top desserts being raved about – the Chocolate Mousse (supposedly the restaurant’s speciality) and Wine-marinated Berries.

Well, of all nights, they didn’t have either. The only “chocolate” option for a chocoholic like me, was a Blackforest Cake. And I hate blackforest cake.

Perhaps I am being unfair just because they didn’t have any good chocolate-based options. But how could they not?!

Anyway, the other desserts were okay. The Baba Au Rhum, Isle Flottante, Crème Caramel – all fine. But nothing so outstanding that we felt it was worth our extreme care in not stuffing our faces throughout the whole meal.

Damn, should have eaten up the soup’s pastry crust and more of the chicken!

But enough regrets about that. I suppose it’s typical of life – the irony of it all.

So, would I recommend Restaurant Paul Bocuse? Yes I would. The dishes are perfection, they should be as these are age-old recipes, repeated over and over again. And yes, if you’re looking for creativity, intrigue, excitement, this is not for you.

But for a classic French meal with “butter, cream and wine”, this is your place.