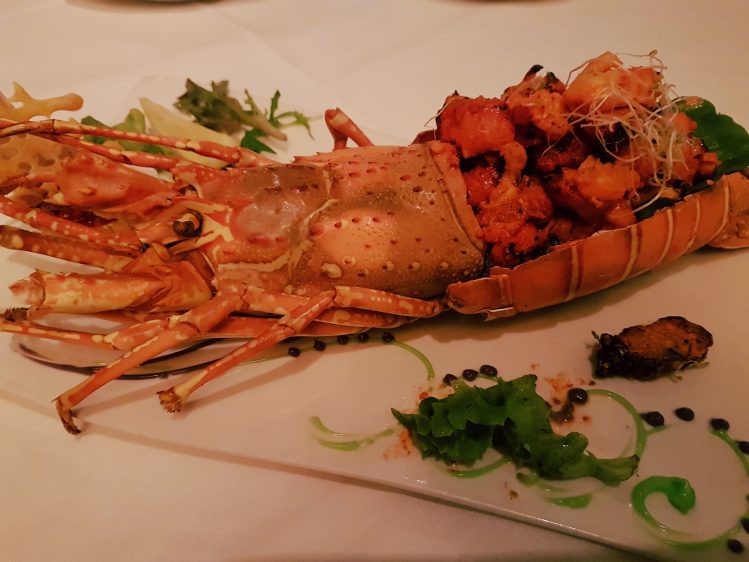 The Song of India was bestowed a star by the inaugural 2016 Michelin Guide Singapore and is the only Indian fine dining restaurant to have been awarded with a star by the guide.

Not to take anything away from The Song of India, but why them over other favourites like Yantra or Punjab Grill is a mystery.

And no, I didn’t solve the mystery during dinner last weekend, I’m afraid.

Housed in a lovely black-and-white bungalow along Scotts Road, walking through an elegantly decorated passageway into the restaurant, yes, the ambience is definitely charming.

It does get cold in the restaurant, but they are well-prepared for this, offering up shawls for those who need some warmth.

And the atmosphere is relaxed, the chef pops by once in a while to ask you how things are, and kudos to him for being so thoughtful.

We had decided to spring for Tandoori Lobster ($65) as a starter, since we were celebrating my mom’s birthday. But I’m guessing that’s not a frequent order off their menu, as the chef came by 15 minutes later, to say that the Lobster would take some time, so he would like to offer us some chicken tikka, on the house, meanwhile.

Very considerate and kind of him indeed. And the chicken tikka was good, tender chunks of boneless chicken thigh, nicely grilled and flavourful.

Set us up nicely for what eventually turned out to be the highlight of our meal – the Tandoori Lobster.

It’s Tandoori. It’s Lobster. What could go wrong? Thankfully, not much. A big lobster, with meaty chunks exuding that classic spicy, smoky flavour of a tandoor grilled meat arrives and we polished it off happily.

I have to admit though, lovely as the tandoori lobster was, this style of cooking for lobster is superfluous. It takes something away from the beauty of a simply prepared fresh lobster. The sweet flesh, with just some butter and lemon, the classic way of preparing lobster is still a winner for me. I don’t really need to pile on loads of flavour to an ingredient, that at its best, is so tasty on its own.

Now the lobster was just the starter. Normally, you would order a kebab or tandoori of sorts at North Indian restaurants as a starter.

Moving on to the mains, we didn’t want the usual Chicken Tikka Masala ($34) or Roganjosh (Lamb – $38), so we ordered the Bhuna Ginger Lamb ($38) instead. It was harder trying to pick something “different” for a fish item though, so we went for a good old Malabar Fish Curry ($35), something of a south Indian specialty from coastal Kerala.

Enjoyed the tender lamb curry, but wasn’t a fan of the fish curry. I felt that it was overpowered by a turmeric/coconut taste, but my mom said it was probably the tamarind that was too strong. Either way, it wasn’t to my taste.

That said, it inspired me to whip up a fish curry of my own, I prefer the coconut-free, spicy, tangy version that is popular with us Singaporeans – also known as the Fish Head Curry. Here’s my recipe for Kerala Fish Curry – same thing as Fish Head Curry, just without the head.

I like the range of naans that The Song of India has on its menu – asides from the classics like Garlic and Butter naan ($9), there’s also Truffle and Mushroom naan ($12) and Saffron and Sesame naan ($10).

We had the Truffle and Mushroom naan, great with the lamb curry, and just the right hint of truffle can be discerned.

One other kind of bread to try, if you do see it on the menu at Indian restaurants that is, is the paper-thin, soft Roomali roti ($9). Said to be shaped like a handkerchief and soft as a flower petal, I’m afraid the one I had at some mid-range eatery near Mustafa Centre was way better than the one here at The Song of India.

The one at The Song of India was not so thin, a little too wholewheaty doughy and just not soft enough.

With just a couple of mains, the breads and some steamed rice ($11), we were full, but wanted to share a dessert. So, again, instead of the usual Kulfi or Rasmalai, we went for the Gajar Halwa with pepper ice cream ($14).

The beautiful aroma of cardamom wafted nicely through the carrot-based pudding, but the pepper ice cream was more like just a plain vanilla ice cream.

So, Michelin-star worthy? Well, like I said, mystery not solved. Some hits and misses with the food, so I don’t get it.

The ambience and service is good but are the prices worth it? Considering that you can get really good fare at half the price at other reputable, albeit not-so-fine-dining Indian restaurants in Singapore (say Samy’s, Gayathri’s, Chat Masala, Kinara),  I don’t think I would be returning to The Song of India anytime soon.

The Song of India: