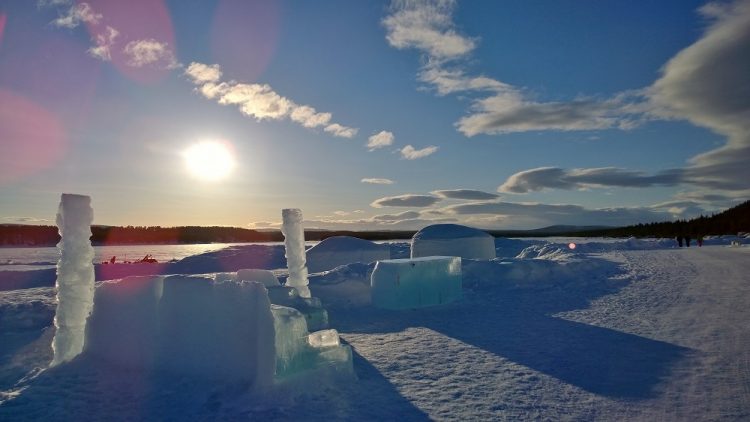 En route on an attempt to see the Northern Lights in Abisko, up in Swedish Lapland, we stayed one night at the famed Ice Hotel. This hotel is truly unique – the fact that every year, the hotel starts to melt back into the river Torne, the ice from which is used to build the hotel, means that you’re not going to see the same hotel year on year.

*for the record, we were there in March 2014, so the ice rooms you see are from that year. 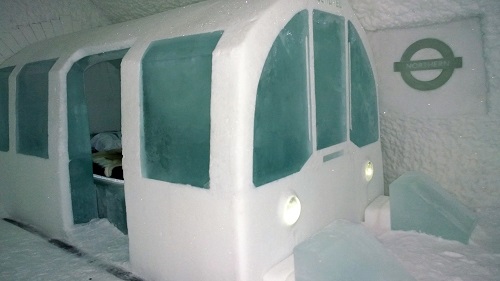 Designers and artists from around the world submit their ideas for the ice rooms, and when selected, craft each room according to their vision, and we saw fabulously quirky rooms like one fashioned after the London Underground, another replicating the effect of the Northern Lights and my favourite, a room called Pole Dancing, with Polar bears “pole dancing” under a glittering disco ball.

You can stay in an ice room, but considering the weather in late March was warmer outside (around 2° C) versus inside the ice rooms (-5° C), we chose to stay nice and toasty in the warm accommodations, which have ensuite bathrooms (those who stay in the ice rooms do not have ensuite). There’s a cute little chapel made out of ice too, and just walking around the snowy grounds of the hotel is charming enough to fill your day, though there are plenty of activities you can take part in, like husky sled rides and snowmobile rides. The hotel loans you, free of charge, snow boots, which are definitely useful in the slushy and sometimes slippery snow, and for those who feel colder, there are onesie snow suits that you can borrow. Being a foodie, I was curious to see what the Ice Restaurant and its “Ice Menu” would be like, and I must say that it was amongst the best meals I had in my Scandinavian travels. It would have been easy enough for them to simply grill and throw on “exotic” meats like reindeer, moose and arctic birds onto the plate, and people may have been fulfilled enough knowing that they ate fresh, local and unique meats but the restaurant shows its finesse with advanced cooking techniques and fine-dining plating.

The Ice menu, a 4-course degustation menu that’s served on ice blocks, starts with a fresh selection of Swedish fish, like salmon sashimi, lightly cured Arctic char and lime salted river perch. The next course comprises meats like smoked topside of moose and cured reindeer fillet that are accompanied with lingonberry and blueberry sauces.

Then came the main, which when the waiter placed the dish in front of me, he asked me to be careful as sometimes they find shotgun pellets in the Ptarmigan (a bird that only flies the Arctic skies). I thought he was joking, well, until indeed I found a pellet in my bird! That really made me feel like I was eating out in the wilderness. Then, a sweet ending with yet another local ingredient playing a key role – sea buckthorn that’s made into powder and sprinkled over a decadent chocolate ganache. 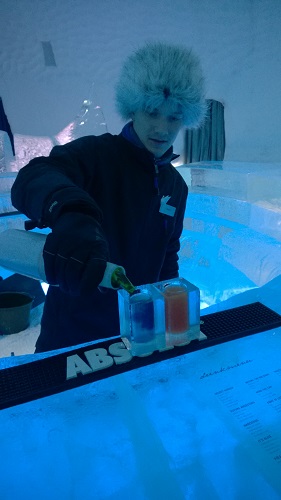 We ended off the night with a visit to the uber-cool Ice Bar, where cute waiters fix you up yummy vodka-based concoctions, served in Ice glasses, of course. Overall, if you’re lucky enough to be crossing the arctic circle in your hunt for the lights, and you’re in Sweden, I’d definitely say stay at least one night at the Ice Hotel – it will be memorable!

How to get to the Ice Hotel:

Flight: We flew in to Kiruna Airport from Stockholm. It’s about an hour and a half journey and will cost around S$400. You should pre-arrange with Ice Hotel for airport transfers. It’s a 15-minute drive to the hotel, but if you want to arrive in style, you can opt for a husky sled ride over!

For more info on arriving via trains and buses, visit Ice Hotel’s Getting Here page.