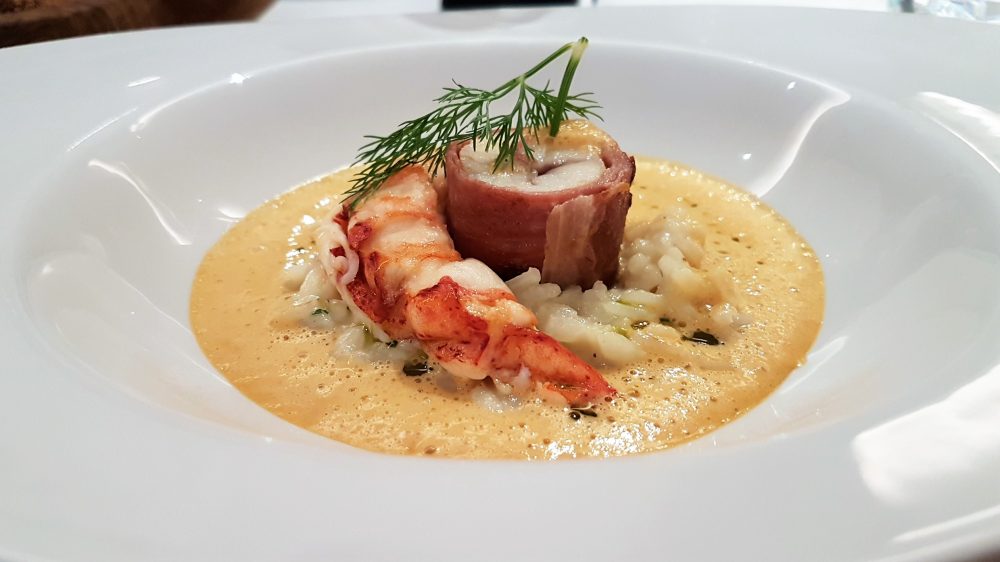 I have been meaning to update my review on Tablescape. Seeing as how I had sung its praises previously, I’m afraid I wouldn’t be as inclined to do so anymore. The chef from that time has left, and the last time I visited for lunch, the selection for the lunch sets had been cut down, featuring rather pedestrian options, compared to the previous menu.

Likewise for dinner, I notice that the menu has changed, no longer do I see some of the luscious items I had mentioned below. Plus, the prices have gone up. So, farewell to what I thought was a true hidden gem.

Tablescape at Grand Park City Hall is quite the find, indeed. I’ve dined there twice in the past month (these days, I feel it’s almost a duty to visit a place more than once before telling my friends about it) and had wonderful meals both times.

Now, Tablescape at the Peninsula Plaza area – how on earth did I stumble into a somewhat inconspicuous hotel with nary a sign about the gem it’s hiding, you might ask. If I wasn’t buying cameras or Thai provisions, why on earth was I trawling the streets of that area, you might wonder.

Well, the first time was thanks to a media invite, without which, you’re right – I would never have known about this fantastic restaurant. The second was dinner with my hubby, I wanted to see if it was as good as when I tried it during a tasting. I think it’s important to return incognito to see if standards match up, and happy to say, it did. Walking into the muted, soft, pastel-inspired décor of Tablescape, you’re immediately cocooned from the hustle and bustle of the area. And among the 1st things you might notice is that magnificent bread cart which lines the entrance, all warm and proud. I am not exaggerating. If I could go for the bread alone, I would. Onion bread, cheese bread, black sea salt bread, sourdough… and the highlight for me – a squid-ink brioche, these are just some of the freshly-made fluffy buns that threaten to break the resolve of anyone on a low-carb diet.

And that bulbous ball of butter, my my, you show-off, you. After you’ve selected your carbs of choice (and you can have them all, they are not precious about that), they’ll scrape off some butter and add on sea salt if you want it salted. And you want it salted.

And dears, this is where I want to say – the set dinner is $48 for a 3-course and guess what? Unlike many other “fine” dining restaurants that charge you extra just for bread when they are already charging you 3-4 times the price of a dinner here at Tablescape, you pay nothing extra for this amazing show of buns.

So, please Tablescape, please do not ever be inspired by the so-called fine establishments out there and start charging for the bread service. It’s not about the money; it’s about the impression of generosity that lingers at the end of the meal, one that will make your guests feel all warm and cuddly inside.

Because I dined there twice, I think I have pretty much tried all the dishes. And I have only good things to say about them. Save for a couple of bits, here and there, of course. My favourite starter is this – the Salmon Gravlax ($16). The bright-jewel like appearance, enhanced by the 24-hour house-curing, draws you in, and three things I just loved about this; one, the generous portion; two, that fabulous idea of a cream cheese ice cream; and finally, that barely discernable hint of lemongrass. Such lovely flavour and sensory combinations! My adventurous foodie friends who worship at the shrine of offal, can try the Veal Sweetbread in Pea Soup ($18). In fact, you can try it even if you’re not adventurous, because the sweetbreads are cut small, and deep-fried first, and you know that anything deep-fried only aids to mask the potential ick factor of eating offal. The vibrant and smooth pea soup is a great distraction too. And another dish that isn’t necessarily for the faint-hearted either is the Steak Tartare ($24) but again, chef Robert Chan, does a magical twist on it, making it something to consider as a heavier starter. The unique twist at Tablescape is the tempura-like poached egg – break the crispy batter to reveal a sunshine puddle of yolk, that is traditionally mixed with the chopped, rare beef for an altogether unctuous dish. I have had 3 mains so far – all stars in their own right. I am a Lobster kind of girl, so of course, the Maine Lobster and Prosciutto-wrapped Monkfish in Armagnac bisque ($38) sang to me. The lobster, so sweet, the bisque, so tasty, the monkfish, a tad dry though. There was risotto in the dish too, and it served to make the already hearty dish even more filling, although I could have well done without it. Chef Robert did say that he was inspired by the old-school European dishes of the past, and you can see the pattern emerging as the night goes along. The Veal stuffed with Foie Gras ($38) is one such example. The succulent meat wraps around the rich foie gras and duxelles, and shaped like a ball, it’s deep-fried to perfection. What really adds to it is the absolutely moreish Madeira jus that accompanies the dish. What doesn’t add up though is the cauliflower “mimosa” – one teeny, irrelevant detail amidst many luscious factors. On my second visit, I tried the Braised Short Ribs ($30). Wow, the meat, all rich and dark and wobbly and tender – what else can I say? The accompanying potato puree was supposed to have horseradish, but I think it was way too hesitant, that said, the beef really didn’t need friends. And then, comes dessert service. Again gueridon-style, a cart is rolled out, with over 10 choices for you to select. The set dinner lets you choose 3 desserts – I recommend the camembert cheese cake, really unlike any other cheesecake you might have tried. The spiced mango mousse is good too, and so is the blackforest, but here’s a tip. After all the rich appetizers and mains, you might want the refreshing champagne jelly for dessert instead. As part of the set, you can choose from the cheese tray if you don’t feel like sweets. And again, generosity. Not so much in the amount of cheese (then again, the portion they give is just right after such a heavy meal) but in the accompanying quince paste and fruit.

All this, for just $48 for the 3-course set dinner. I cannot help but stress that point – these days, it’s rare to find such quality, generosity and service at that kind of price point, so… when I say Tablescape is a hidden gem, it really is.