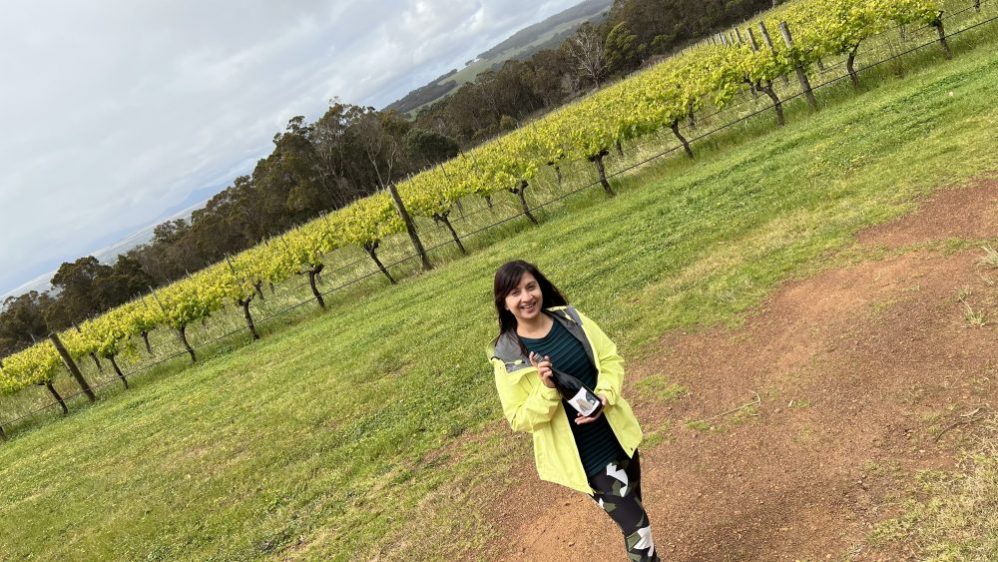 “The Great Southern Wine Region in Australia? Oh, you mean Barossa?” I replied, with an ever-so-slight conspirational nod, thinking of the bombastic Shiraz that the region is familiar for.

“Oh, you mean, Margaret River?” I offered, this time feeling cockily certain. After all, I do have an extensive knowledge of the wine regions of Australia, right?

Not quite, as it turns out. Apparently there is an entire region in Australia called the Great Southern which, while near the Margaret River region, is not part of it at all.

So, good, old Margs, as the Aussies would say, is not the definitive and only wine region in WA? Fascinating. Another unknown wine region to explore and enjoy!

A couple of months ago, hubby and I decided to break our travel embargo and while thoughts of Europe (our all-time fave region for holidays) sprung to mind, we chose on the side of caution and decided on somewhere nearer, hence Australia, specifically, Western Australia. Despite everyone else we knew having had Covid, we were still untouched by it, so were still a little apprehensive. But five hours on a plane? No worries, mate.

Not like the distance makes a difference to whether we may get Covid or not, but we’re logical like that.

(Spoiler alert. I started symptoms when I returned home from the vacation and tested positive for Covid. Hubby remains, blissfully, a Covid virgin).

Anyway, distance wasn’t the only reason for our selection. We wanted to pay homage to our very last trip before Covid shut us down. And that trip was to Perth and the Margaret River region. A region we absolutely fell in love with.

This time though, we wanted to go beyond afore-said region, so a quick Google search of Western Australia showed up places such as Albany and Denmark.

After countless hours spent watching beautiful bodies on YouTube exploring the breath-takingly rugged and remote nature of Southwest Australia, we decided tagging on a road trip to our planned Margs jaunt was essential.

Now the YouTube videos of those beautiful bodies comprised bucket-list worthy challenging hikes and prancing around the most sublime beaches in Australia, but wine wasn’t really on their radar.

However, digging a little deeper led me to more information about the Great Southern wine region.

Even then, I thought maybe it was just a sporadic scattering of small growers, and that it wasn’t going to be a key part of my Southwest holiday.

Well, as it turns out, it made my 3 weeks in WA quite the wine-tripping affair, indeed!

Now, the Great Southern is pretty much overshadowed by it’s more sophisticated cousin, and I’ve captured my Margs BDX exploits (Bordeaux blend, what Margaret River wines are famous for, what did you think I was saying?) in Margaret River Wineries You Won’t Want To Miss Part 1 from 2019  and Part 2 from 2022 , but for now, let’s zoom in on the Great Southern!

What I learned about the Great Southern:

Not the Barossa? Shocker. Well, it makes sense considering the large expanses of this relatively remote part of Oz. Counting the 5 sub-regions that comprise the Great Southern GI – Denmark, Albany, Porongurup, Mt Barker and Frankland River – the total size is 17,131 km2 with a total of 2,545 hectares of vineyards.

Ok, but let’s not drown in the details.

Fact: You won’t be overwhelmed wine-tasting in the Great Southern.

There are just over 20 cellar doors. Compared to the over 80 in Margs or in Yarra Valley for example, this is a less-intimidating number.

That said, my advice is to just stick to 2-3 visits per day. Otherwise you risk a serious case of being wined-out. It is possible because after a few, they all start to taste the same, and you’ll start craving for anything but Rieslings, Shiraz and Pinot Noir.

(One reason why I jumped for joy when I saw Forest Hill Gewurztraminer during my lunch at the best restaurant in Denmark – Pepper and Salt. Unfortunately, the cellar door itself did not have any for sale). Fact: A grape in any other terroir is just not the same.

When we were at cellar doors and they’d ask what we liked to drink, we’d say Pinot Noir and the answer would invariably be: “Well, you’re in the right place!”

However, our Pinot Noir preference proclamation is mainly based on the Burgundian style, and this was hardly what we evidenced here in the Great Southern.

But clearly a Pinot Noir from the Great Southern expresses itself quite differently from those of Burgundy.

Juicy and fruit-forward, less of the secondary aromas of earth, mushrooms. Elegant, nevertheless.

What really hit me about the Rieslings was that intense acidic and citrus punch. I am more sensitive to acidic flavours so hope they weren’t too offended by my puckered up funny faces during the tastings!

Most times, we smelled aromas of lemon and lime, and apple, all very fresh, and probably great with fatty or spicy food. The wines we tasted were mostly recent releases, but we were informed they are age-worthy and will increase the toasty, honeyed and petroleum notes that finer Rieslings are known for in time.

It’s a lesson indeed for us to learn that the fanaticism of French wine producers and regions doesn’t apply here in the Great Southern. No fixation that only Pinot can grow here, Chardonnay there etc.

The variability of the climate and soils, coupled with the curiosity of the winemakers result in experimentation to see what works and where. Go with the flow, almost a life lesson I should say!

It’s relatively young region, and there are fascinating stories about people who moved to the region and then decided to start making wine!

Now, our shortlist of wineries to visit in the Great Southern:

These are the wineries / cellar doors we visited. It was unfortunate that we couldn’t visit more, remember, it wasn’t a purely wine-tasting trip, we were there to climb mountains too.

This winery from Albany was our 1st stop on our Great Southern wine tasting journey and is about as boutique as it gets. I say that because when we asked if they export, the owner said they don’t even export out of WA!

We booked a $28 each tasting session, that would include 5 wines and some delicious matching morsels.

We were met by the owner, an affable and down to earth Murray, who was later accompanied by Pam, the second owner and 2 dogs! We had a nice, informative wine tasting that set us up right for the rest to come. The duo pride themselves on being organic and not just carbon zero but carbon negative.

Interestingly, we ended up buying a bottle of their home-brewed Vermouth, none of the wines (simply because we knew we’d be visiting many more wineries thereafter).

Alkoomi is a 3rd generation award-winning family winery with its vineyard in the Frankland River region that offers some fascinating wine tasting experiences. In fact, they were awarded the 2022 Best Tasting Experience in the Great Southern by Gourmet Traveller Wine magazine.

If you’re looking a simple tasting session though, the cellar door in Albany will suffice. We particularly enjoyed the Rieslings here.

Another family-run estate, we were lucky to be hosted by the founder’s son and owner himself, Rob, when we walked in on a slow Monday morning. Such a character, indeed!

He spent over an hour sharing about everything from his experimentations with fermentations to tips on how to quickly aerate a wine (it involves sploshing your wine into a large, clean bucket) to Covid19-related issues.

Wignall’s vineyard is in Albany itself, and he explained how the terroir was highly suited to Pinot Noir and Chardonnay, which we evidenced ourselves during the tasting and made a welcome break from all the Riesling!

Plantagenet is a short drive from Castle Rock, so again, if you’re in the region, it’s a must to visit for its balanced and structured wines. Not to mention that it is one of the pioneering wineries of the Great Southern region. There are options to have a casual lunch here as you taste the wines.

Denmark is home to some stunningly beautiful beaches including Misery Beach with was named Best Beach in Australia in 2022. If you’re driving from Albany to Denmark, absolutely take the scenic route and stop off to marvel at the gorgeous blues, with powerful waves of the Southern Ocean crashing again the rocks.

Back to wine, though.

You’re likely to come across this winery in your research, especially if you’re searching for lazy, long wine lunches. The winery is located in a picturesque lake setting and would be a lovely place to setup a picnic as well.

We went there with an intention to takeaway a platter for our dinner, and taste some wines along the way, but ended up staying for over an hour on account of our wonderful host, a fellow Singaporean who had migrated to Australia when she was young.

She was so knowledgeable and passionate about wine, well, if you are there, perhaps look out for Sonia.

Forest Hill is the region’s first commercial vineyard and was established in the Mt Barker region in 1965. The winery is also home to Denmark’s top restaurant, Pepper and Salt, and we got to try some of their wines over lunch, and later at the cellar door.

I must say, after so much Riesling and Pinot Noir, it was refreshing to see Malbec and Gewurztraminer on the wine list over lunch, we loved it, but unfortunately no stock left of the latter to purchase at the cellar door.

And those we missed.

We’re kicking ourselves now for not making time and wine-headspace to visit Singlefile, Harewood Estate, Rockcliffe, especially since these three were literally down the road from where we stayed at Karrak Reach Forest Retreat in Denmark.

Particularly Singlefile which quite a few people asked if we had visited, oh well.

In addition, some of the winemakers we met recommended Duke’s, Ironwood and Moombaki, but as I said, after one too many cellar doors and all our hiking, some days we just wanted to chill at the gorgeous accommodations that we had paid a pretty penny for.

Well, all the more reason to plan a return trip to the smashing Great Southern!

Classifications aside, the OTHER wine region in Southwest Australia:

We only had 1 day in Pemberton and we managed to only visit Hidden River and Ampersand Estates, both of which were amazing.

We had a wine tasting over a delicious lunch at Hidden River estate, and particularly enjoyed the wooded and unwooded Chardonnays.

We reached Ampersand relatively late, around 4.30pm, but the wonderful owners still entertained us with a tasting and detailed explanations about the winery.

Ampersand Estates is also a great place to stay, if you’re looking for a little luxury.

On a side note, we were mighty thrilled when they played our band’s (Buddha In The Balcony) music over their speakers, once they heard that we had songs up on Spotify.

Well, that sums up our awesome wine trippin’ along Australia’s Great Southern, if you’ve been, drop me a note on what your experience was like. And if you plan to go, I hope you’ve found some gems in this article!