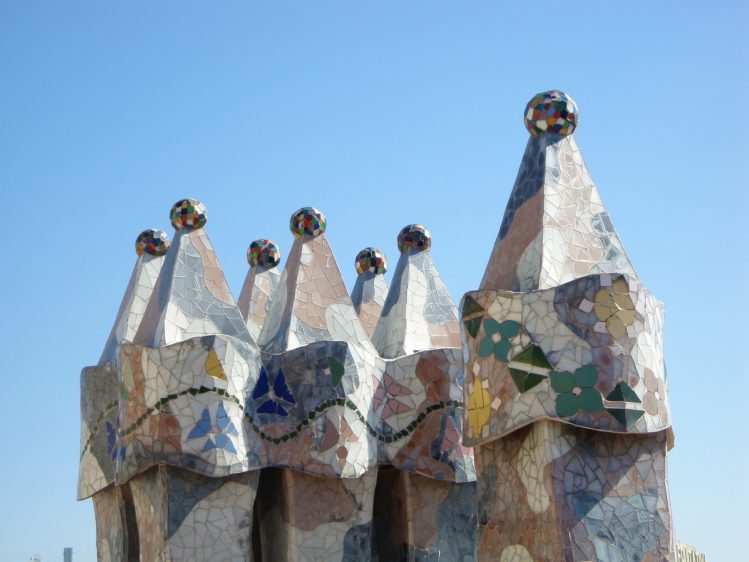 It’s easy to understand why Spain is the second most popular country to visit in Europe, after France.

From Gaudi to Gastronomy, hands down Spain has got its flamboyant flamenco imprints all over it.

Seville stole my heart with its small town (some might say, more authentic) Spanish feel, but Barcelona’s got me big time too.

Here are my top ten highlights in Barcelona:

Because Antoni Gaudi and Barcelona are one, you cannot visit the city without admiring the whimsical magic of his architectural creations. Half my list is in celebration of Gaudi’s genius.

My favourite of the lot is Casa Batllo. Built between 1904 and 1906, the “organic” design has allusions aplenty to nature. Just look at the balconies with their skeleton-like appearance. Or the flowing curved design of the rooftop that seems to represent the thorny spine of a sea animal.

Tip: Get the audio guide to fully appreciate the fantastic imagination of Gaudi and the many facets of this amazing house of the Batllo family. Purchase advance tickets to skip the lines. A multi-coloured mosaic monitor lizard greets you as you make your way up the stairs into the quirky playground of Gaudi – Parc Guell, a UNESCO World Heritage Site.

Once again, mimicking nature as only Gaudi could, stone forests lead you up to the top of the park, which offers brilliant views across Barcelona city.

You can also visit Gaudi’s House located within the park; he had lived there for just under 20 years before he had moved to La Sagrada Familia, to be closer to his masterpiece-in-progress.

Tip: As there is a limit to the number of visitors each day to the Monumental Zone (where most of the attractions of the park can be seen), it’s best to buy tickets in advance. Funny story this one. I only managed to visit this because I had missed my flight. So I traipsed back to the city, dropped the bags off (again) at a hotel, and thanked the lucky stars for daylight savings switcheroo mishaps. (I was on holiday and missed the entire moment when the clocks went forward by an hour – it’s an honest mistake!)

Casa Mila is located on Barcelona’s main shopping street, Passeig de Gracia, and when it was being built in the early 1900s, the neighbours wanted to stop the construction of this home, as they were concerned Gaudi’s handiwork might bring the value of the residential area down.

Well, how wrong they were.

Casa Mila is a top attraction in Barcelona and another prime example of Catalan Modernisme by Gaudi. Head up to the rooftop to observe the twists and turns of the structures that look very much like the fairy chimneys of Cappadocia, Turkey. No doubt this is the most famous attraction in Barcelona. I think that has something to do with the unfinished story behind this cathedral.

Construction started in 1882 and over a 100 years later, it stands at 70% complete. The goal is to complete it by 2026, the centennial anniversary of Gaudi’s death.

La Sagrada Familia is probably one of the most fantastical cathedrals you will see.

You can walk around the grounds for free but people queue up to pay to visit the interior, climb up the towers and admire the views below.

Tip: Get your tickets in advance to save you hours of queueing. One last homage to Gaudi – dinner at Casa Calvet. This house, built by Gaudi for a textile manufacturer, is home to one of the most romantic places you could have dinner at in Barcelona.

Well, especially if you have a bleeding arty heart like me, I don’t think you would want to give up on a chance to dine at a house built by Gaudi.

And the food? Really brilliant. Modern, aesthetically pleasing, and very delicious. Despite the language barriers, made worse by a long distance call, my hubby managed to get them to adorn the table with rose petals in honour of my birthday!

Tip: They have an excellent weekday lunch offer at just 38€ for a 3-course meal. I think I have said it before, I love any city surrounded by water and in Barcelona, the most popular promenade, La Ramblas leads you past many street performers, flower shops and tapas bars to the Port Vell harbour.

As in most European major cities, the tapas bars and cafes directly on the street may not be where you want to spend your money at (read: pricey) but in the little lanes leading out of the main drag, you will find the places where the locals hang out.

Tip: It’s a safe and pleasant stroll but just be wary of pickpockets and tricksters. Now, it really is a sin to visit Barcelona and not go to market. La Boqueria, specifically. Located just off La Ramblas, this is not just a market to watch locals go about their business. Peppered with tapas joints and several stalls selling jamon, cheese and all sorts of Spanish delights, you can definitely spend a few hours here and eat really well!

Tip: Time your visit before 2pm for the most buzz. Although he was born in Malaga, Pablo Picasso did have a deep relationship with Barcelona, and this museum, with over 4,000 works of his art, sheds light on his formative years.

Again, skip the lines and get your tickets in advance online.

Now this place isn’t one normally found on the top places to visit lists, but hey – it’s a museum about chocolate. Why wouldn’t one want to go?!

See chocolatey representations of famed Barca icons like the Parc Guell monitor lizard and the logo of FC Barcelona.

And if you have kids, they will definitely enjoy getting their hands dirty with some chocolate play activities! Adjacent to the Port Olympic area, is Barcelona’s favourite beach where summertime sees throngs of people enjoying the sun, and heading off for drinks and dinner at the restaurants along La Barcelonata.

One restaurant to try is Can Majo. Not only did I have a yummy Lobster Paella, this is where I discovered just how generous the Spaniards are with their wine! And there you have it – my top 10 highlights in Barcelona! Do share your favourites in the comments below too!